Hotspot on the Huron

Nannothemis and I heard of a boggy area in Island Lake State Recreation Area in Livingston County, Michigan, so we decided to search for it on July 25th. We had hoped to obtain photos of the real Nannothemis bella and poked around various areas of the park without finding the exact location.

However, while searching we found a great location along the Huron River at the canoe campsite area. It is removed from the busy parking lots and roadways that were swarming with all the bicyclists. The only people at this location were the canoeists paddling down the Huron. As soon as we had arrived at the riverbank, we saw two Dragonhunters (Hagenius brevistylus) working the far bank and one perched on the branch of a downed tree. I thought this would be my chance to see this species in the hand for the first time in MI so I waded out. Unfortunately, the recent rains had increased the depth of the river and I couldn't cross without immersing myself so I waited at the nearshore. Even with the passing disruptions of the canoeists, the large dragonflies wouldn't cross to my side. 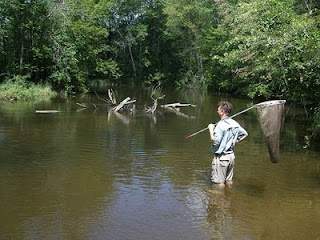 During my time in the water, additional dragonflies turned up that aren't found every day around here.

- A Black-shouldered Spinyleg (Dromogomphus spinosus) flew in and perched on a tree just upstream. There was no possibility to approach due to the water depth and the shoreline vegetation.

- Two or three Royal River Cruisers (Macromia taeniolata) flew up and down the waterway. One male came too close to me and became the first record for the county: 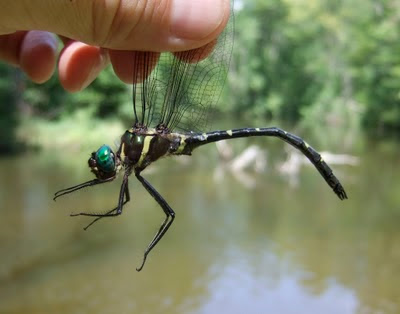 One has to love their eyes: 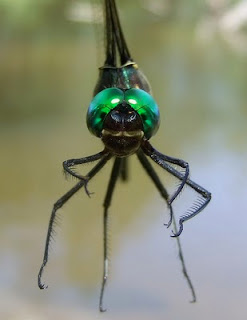 - Eventually a darner arrived and worked the middle of the river, occasionally scrapping with the river cruisers. The abdomen was noticeably stout and seemed a bit shorter than the typical Aeshnids. The eyes were bluish and the "nose" also projected out from the face provided features to ID this as a Cyrano Darner (Nasiaeschna pentacantha)! This is the latest date we have seen this species in SE MI.

- The most numerous species at this location was the Blue-ringed Dancer (Argia sedula). We know of only one location for them in our home county of Wayne, but I suspect these are more common in better quality water areas such as this. 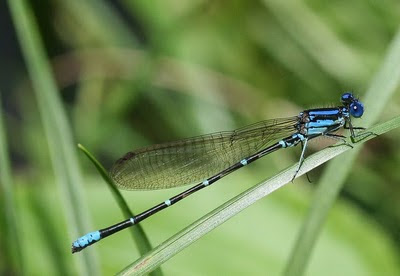 We didn't find the boggy area, but we did find a great location for odes.
(Nannothemis did return a few days later and found the boggy area near an old sand/gravel area with a spring-fed lake.)
Posted by Darrin OBrien
Email ThisBlogThis!Share to TwitterShare to FacebookShare to Pinterest