Bryan Pfeiffer, editor of the Boghaunter, helpfully sends along this photo of one of his encounters with Anax longipes. 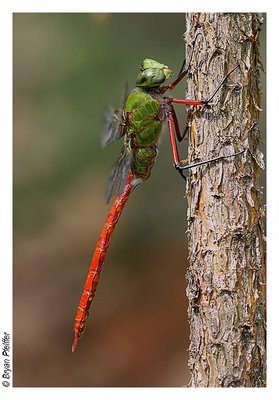 Things have not been quite as rosy since the score with the Variegated Meadowhawk. As is my habit, I check the retention ponds in all the new subdivisions I happen upon. (Why they are still building houses in a county with the highest foreclosure rate in the country, I'm not sure, but they are.) Lately I have been doing bird surveys in some of the older and more heavily developed working-class suburbs more or less in the center of the county. As I was scanning a new pond in Taylor, our old nemesis, the Comet Darner, Anax longipes, cruised by, chasing one of the many usual pond skimmers. I watched it for some time before deciding it was spending just enough time near the edges of the pond that it might be worthwhile for me to fetch my net. Nearly an hour of patience yielded only two passes worthy of a swing, which were unproductive.

I did record 16 species of odonata in this lousy pond, including Marsh Bluet, Enallagma ebrium, a species which we've only found in one other (retention) pond, which was the first county record since 1904. I later researched this area and found out this pond was once surrounded by woods. While this may have contributed to its diversity, it had clearly been scoured out and drains put in, etc. Depressing. Stylurus and I returned today, but no longipes. If you are keeping count -- and we are -- this is the fourth location we have seen this species and been unable to catch one to voucher it for the county.

In yet another carved-out subdivision last weekend, this one in Belleville, we watched that blue-eyed beauty the Spatterdock Darner, Rhionaeschna mutata, circle an especially mucky and scummy retention pond. This species is usually found in wooded ponds with spatterdock, and we think it came from a pond a few miles away which we can see enticingly from a bridge, but can't access. The pond is midway between this site and one of our favorite metropark sites where we have seen Rhionaeschna before. And this pond did have woods nearby (now partly destroyed). It stayed mostly over the water, and when it did venture close to us, we missed. Yesterday we went back, and it wasn't around. We may as well begin a tally on this one: Spatterdock Darner 2, Urban Dragon Hunters 0.

Back in Taylor today, after our failed Anax longipes search, we went to a nearby municipal park. A retention pond was created to the right of the big field with the star in it on the map below, but there wasn't much there. As you can see, this area is highly urbanized. 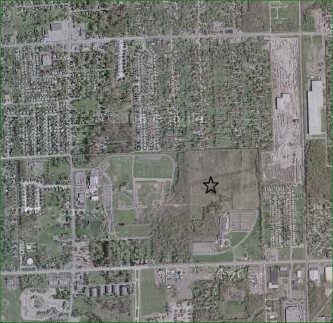 As we were leaving the field (we'd been hoping to catch some Sympetrum for a study being done by Nick Donnelly; we saw none), a brownish ode caught our attention. After several passes, Stylurus was able to nab it. To our great surprise, it was a Mocha Emerald, Somatochlora linearis. The only other county record was one I caught at Lower Huron Metropark in 2001. While it is often the most common emerald where it is found, there are only a handful of specimens for the state. Look again at the aerial photo; we caught it at the edge of this field where the star is. These are odes of wooded streams. There might be a ditched creek on the north side of the park, but really, where did this come from? I think it illustrates, once again, that you can find interesting odes in uninteresting, unexpected places.
Posted by JAC 0 comments
Email ThisBlogThis!Share to TwitterShare to FacebookShare to Pinterest
Newer Posts Older Posts Home
Subscribe to: Posts (Atom)
Give the Gift of Amazon Prime