The UDH just haven't gotten out enough this year. Despite drizzle and 90% humidity, we headed to the Detroit River International Wildlife Refuge, Humbug Marsh Unit, introduced here. Late last summer, we had boatloads of Black Saddlebags (Tramea lacerata) there, and thought we saw a couple of Stylurus, one of which we felt was Russet-tipped Clubtail (S. plagiatus), a species of special concern in Michigan which I'd only found before at certain spots along the Huron River. In these spots, plagiatus and its cousin the Arrow Clubtail (S. spiniceps) would sit in shrubbery that bordered a large grassy field with scattered tall weeds or small shrubs, adjacent to the river. The old brownfield at the Refuge -- below, formerly a paint plant and one day to be the welcome center -- has precisely this habitat. We figured perhaps the warm but cloudy weather would be to our advantage and the odes would be perched. We also hoped we might have a chance to find Striped Saddlebags (T. calverti) since one had been seen along the Lake Erie shoreline in Ohio recently. 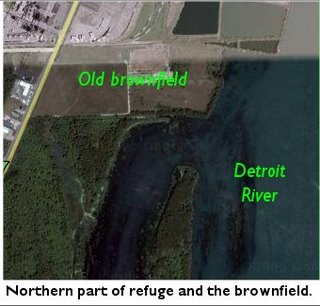 Once we got to the point along the southern edge of the brownfield where it was adjacent to the river, we started seeing Russet-tipped Clubtails. Stylurus, appropriately, found them first. We found at least two dozen prior to the rain starting again. Many were obligingly perched where they could be photographed: 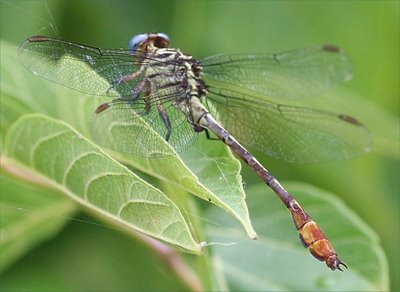 We obtained two for voucher specimens, including a female with a deformed wing (below); I have a state endangered species permit which allows me to collect these species. I also collected a Tule Bluet (Enallagma carunculatum) with a deformed abdomen. Anybody who has spent enough time looking at odonata will find some funky ones. I've been thinking lately they are worthwhile to submit to museum collections, in case one day they can be examined for genetic defects or environmental contaminants, although I suppose most deformities are caused by some mishap during emergence. In this case, the Detroit River isn't particularly pristine, and there is a chemical plants just on the northern border...which was emitting strong paint fume odors even on this Sunday afternoon. 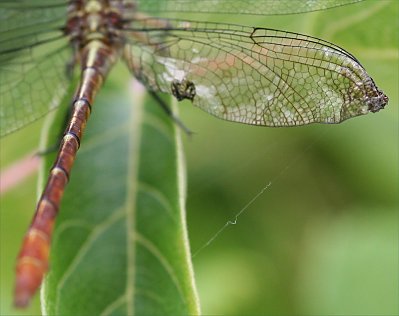 We also kicked up one or two other species of clubtails. One perched just out of net reach, and we were able to see it was indeed an Arrow Clubtail. Among the many Black Saddlebags and Common Green Darners were a handful of Aeshna darners; the ones we got looks at appeared to be Lance-tipped (A. constricta). 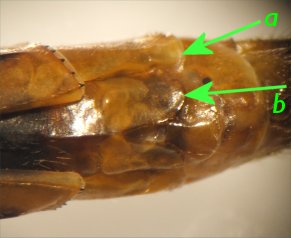 I was poking around some shrubs and saw a red-colored saddlebags land on a twig. Carolina Saddlebags (T. carolina) are typically not common in southeast Michigan, although some years are good for them. We've seen very few this year.

This one, however, turned out to be a Red Saddlebags (T. onusta), a new county record. There are only two specimens for the state, and one photo record from the county. Pennsylvania just had its first state Red Saddlebags, so they may be on the move this year. 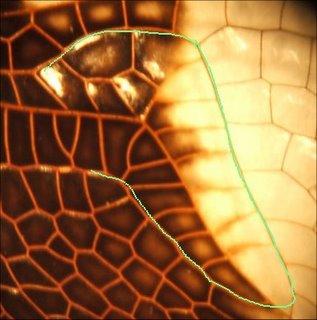 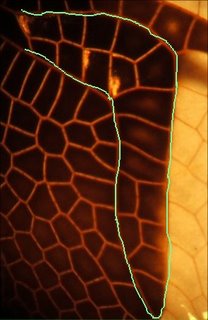 In addition to Red Saddlebags and Striped Saddlebags, other interesting vagrants lately have been Band-winged Dragonlet (Erythrodiplax umbrata) on 11 August in Cincinnati, Ohio and Evening Skimmer (Tholymis citrina) in ~19 Aug in McCurtain Co., Oklahoma. We'll be out again next weekend!
Posted by JAC 0 comments
Email ThisBlogThis!Share to TwitterShare to FacebookShare to Pinterest 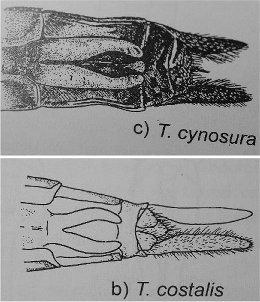 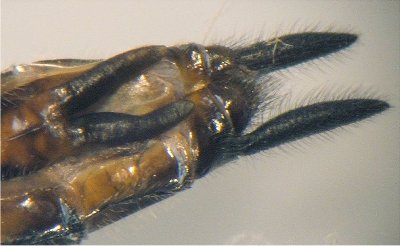 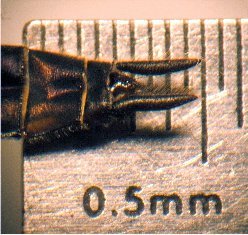 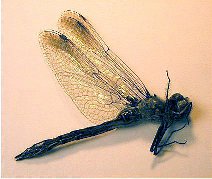 A little "up north" field work

Last weekend, the Urban Dragon Hunters left the urban jungle for up north. In Michigan, "up north" is usually anything north of a line extending through the middle of the Lower Peninsula. We went to the northeast part of the state, hosted by Fancy Footwork Fred, new to odonata hunting. He has a great eye, but his technique needs a little refining. It involves a lot of scrambling, fast feints, and urgent whooshing swings versus a little patient stalking. Hey, we were all there once. I think we'll call him Pachydiplax, in honor of the Blue Dasher.

Probably our best find was Mocha Emerald (Somatochlora linearis), a new county record and one of a handful in the state. Another example of how little we know about the distribution of this species (last encounter is here). The only other emerald I've caught in Michigan is Brush-tipped (S. walshii), and we found a couple of those, too. New for us was Williamson's Emerald (S. williamsoni), which we unexpectedly found at a creek crossing on a pretty busy road.

We had four species of mosaic darner, which are always fun. They all look the same on the wing, and there is always a sense of anticipation once you net one and examine the combination of facial colors and the shape of the thoracic stripes and cerci to see what you've got. Lance-tipped Darner (Aeshna constricta) was the most common, as it is around here. Here is a green-from female we netted and released. 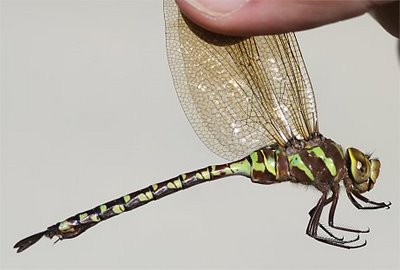 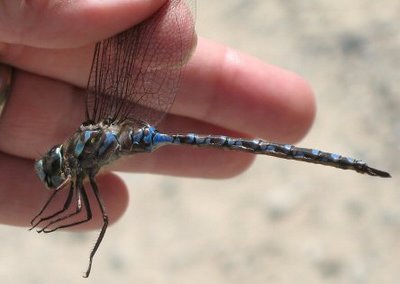 We had one Black-tipped Darner (A. tuberculifera, what a cool name). Our other new ode was a Lake Darner (A. eremita), a county record. Here she is: 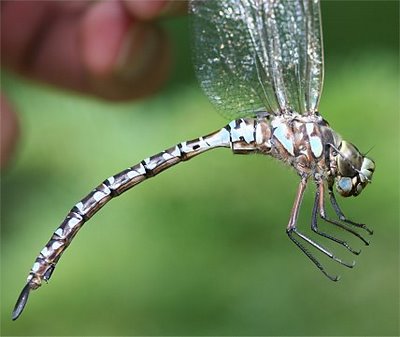 We were very surprised at how few damselfies we found -- species and individuals. As usual, Eastern Forktails (Ischnura verticalis) were most common. I found this dainty female having a lacewing for breakfast. Even the most delicate odonata are feared predators! 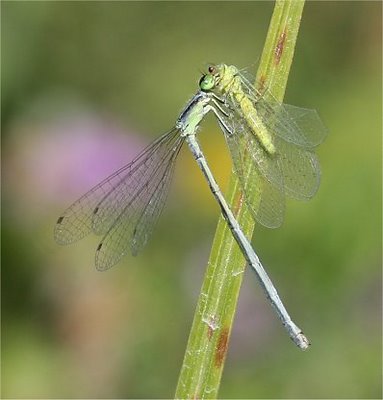 We ended up seeing 35 species and alas, the weekend was all too short. Summer is slipping away.
Posted by JAC 3 comments
Email ThisBlogThis!Share to TwitterShare to FacebookShare to Pinterest

Fragile Forktails (Ischnura posita) are not really worthy of an exclamation point, except that this punctuation mark appears on the thorax. Usually the markings are pale green, but females and immature males are blue, like this one I saw a couple weeks ago: 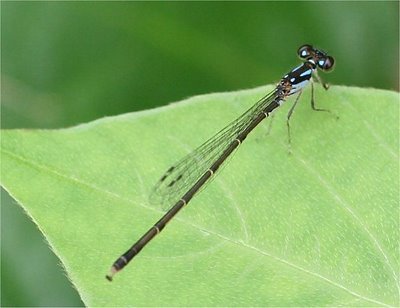 Stylurus and I went to a new wetland area adjacent to one of the local rivers. Considering the very hot weather we had a couple weeks ago, we sort of expected some Aeshnas to be out and about, but we saw none. Our most notable find was a single female American Rubyspot (Hetaerina americana) along the river. This is a particularly flashy, silty, pretty polluted river, and we've never seen a rubyspot along any of its branches or tributaries. The next day I read that a 500,000 square-foot shopping center will be built nearby. There goes the neighborhood.
Posted by JAC 0 comments
Email ThisBlogThis!Share to TwitterShare to FacebookShare to Pinterest
Newer Posts Older Posts Home
Subscribe to: Posts (Atom)
Give the Gift of Amazon Prime