Striped Saddlebags and the value of vouchers

Our paper on Striped Saddlebags appears in the most recent issue of the Great Lakes Entomologist. As the title implies, it not only describes our first state record for Michigan in 2010, but also includes reports from the Great Lakes region, all over the eastern U.S., and background on previous northward movements of this species.

In late 2010, this southern species was reported from eight states and Canada north of 38°N. It had never been reported in five of those states and Canada. Some of the locations had multiple sightings over multiple days. Quite a few were photographed.

But the voucher we obtained was the only one obtained in 2010 in this incursion. Not just in Michigan, but anywhere in the eastern U.S., as far as we were able to determine.

We've talked before about the pitfalls of trying to identify Odonata from photographs, one reason most states require a voucher specimen to confirm county or state level records.  Of course, many species, including Striped Saddlebags, can be identified from a photo. But concrete ID is only one aspect of the value of specimens, and the lack of vouchers of Striped Saddlebags from 2010 is a good example.

Ohio, for instance, had multiple sightings of Striped Saddlebags in 2010 in at least two locations. However, this wasn't the first time this species had been seen and photographed there. There were reports from 2006, 2007, and 2008. No vouchers have been submitted for this species in Ohio.

There are a number of fundamental questions that cannot be answered by the photographs of Striped Saddlebags in Ohio, such as whether or not this is a breeding population, or if they are repeatedly colonizing the same spots year after year. Nor can we determine where they came from. Because there are no vouchers from Ohio or other states (except ours in Michigan), we can't see if these saddlebags all originated from a particular region or population. Or if there is some subtle morphological difference in these far-wandering saddlebags -- wing shape, flight musculature, etc. -- that helped them make the trip north. And, if breeding populations are being established from such individuals, whether these traits being maintained in the population, representing evolution at work.

Specimens could help answer these questions (and others I have not considered, I'm sure). Molecular work on insects is widely used to look at dispersal, routes of expansion, and colonization; delineate genetic populations and gene flow; and examine evolutionary divergence. Measurements of morphological traits obviously cannot be performed without a physical specimen.

When our paper went through informal and formal peer review, several referees did not want sight or photo reports included at all because they are generally not accepted by the scientific community. Obviously this removed a great deal of context for our record. In the end, we came to the conclusion that describing all the sightings would at least provide some published historical record, given that specimen material is not available.

And publication in some sort of formal journal is important. Usually these are archived in libraries as hard copy and are therefore available to researchers for the long haul. About 70% of the Striped Saddlebags records we referenced in this paper were found on local Internet forums, listservs, or personal web sites. These sources are far too ephemeral and difficult to find to act as historical documentation. Fortunately, quite a few of the records were also submitted to Odonata Central. This is extremely helpful, but does not replace vouchers as valid records in every state, and as a site that relies on donations, it's future is not guaranteed.

For significant records of Odonata, please consider collecting voucher specimens. If you would rather not do it yourself, please let someone who is willing to do so know about your observations.
Posted by JAC 3 comments
Email ThisBlogThis!Share to TwitterShare to FacebookShare to Pinterest

Thinking about the other Stylurus species along the Raisin River, we headed back to Monroe County, MI on August 20th.

The highlight was flushing a young, male Carolina Saddlebags (Tramea carolina) which provides the first record for Monroe County. I had guessed I'd have to wait until the southerly winds in September brought some north, but that wasn't the case.

Here's a lateral view showing the black down the sides of the abdomen and the smaller hamules: 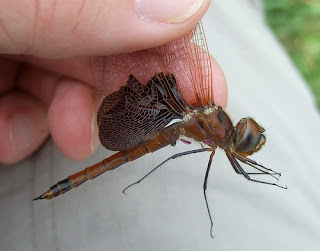 Here's a shot of the purplish frons: 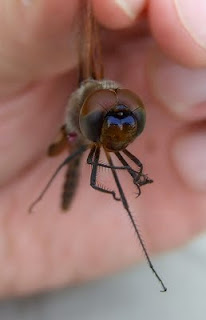 I guess I'll have to make another visit in early September to Monroe County for the other Stylurus species.

Consider a contribution to Odonata Central

Odonata Central is a great resource for dragonfly information including (as noted on its homepage): "distribution, biogeography, biodiversity, and identification of Odonata (dragonflies and damselflies) world-wide"

We'd encourage all people taking photographs of dragonflies to enter their data in the Odonata Central database. This can help us all understand the distribution and phenology of the various species.

However, the site is also in need of monetary donations. Updates and improvements to the site and database are planned and this requires resources. Thus, John Abbott (the man behind Odonata Central) has added a link on the home page to make secure online donations.

If you haven't done so before, please go and check out the site.

After checking a couple of previously known locations in Wayne County over the past week and coming up empty (for a variety of reasons), we decided to check the Raisin River near Dundee in Monroe County. Last year I did see one male patrolling the river.

We revisited the site near US-23 first and found very little other than a couple of Lyre-tipped Spreadwings (Lestes unguiculatus). The shoreline and upland habitat had been changed a bit in the last year with more shoreline trees removed and all the upland habitat being mowed.

Our next stop was West County Park. This is a great park bordering a bend in the Raisin River east of Dundee and has many upland acres of native prairie plantings. Upon arrival, this area looked good for Stylurus: tall trees at the water's edge, shrubby (dogwood, viburnum, etc) areas adjacent to the trees, with native or fallow fields upland. 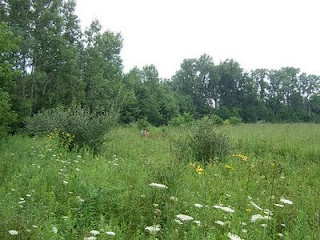 Within minutes of walking the trail nearest the river, a clubtail flew up from the vegetation and perched on a trailside Monarda. A quick view with binoculars confirmed it was a male Russet-tipped Clubtail (S. plagiatus). Here is a shot taken through my binoculars: 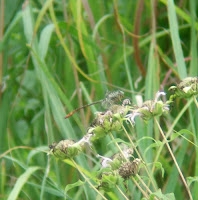 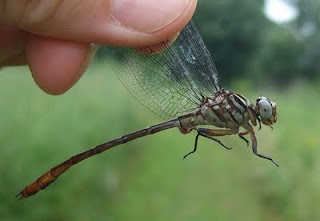 This is the first confirmed record for Monroe County!

Walking the edge a bit more turned up several more individuals including one coupled pair. 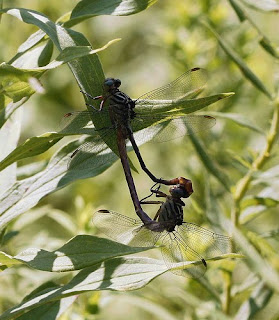 Also, a dark Stylurus clubtail flew up and away from the vegetation without giving time for species ID. It was likely an Arrow (S. spiniceps) or an Elusive (S. notatus) Clubtail.

Checking the river's edge turned up two dark rubyspots (Hetaerina sp.). I didn't even have Smoky Rubyspots (H. titia) on my mind, but there were at least 6 perched along the bank. This is the earliest in the season we've had this species in Michigan. Here is one of the males: 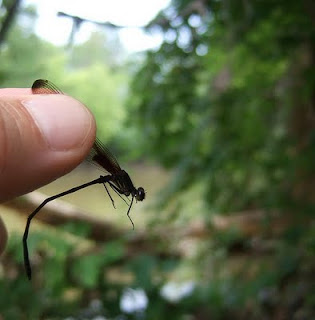 While poking around the edges, I flushed at least 3 Fawn Darners (Boyeria vinosa). These were perched amongst the shaded trees and downfalls: 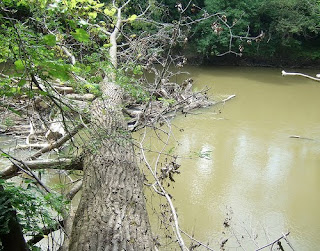 At one point a Royal River Cruiser (Macromia taeniolata) was observed patrolling the river which turned and flew up over the upland area of the park. Later we found one hunting along the trail near some of the taller grasses.

The trail through the northernmost portion of the park turned a few Lyre-tipped Spreadwings (Lestes unguiculatus). Here is one of the males: 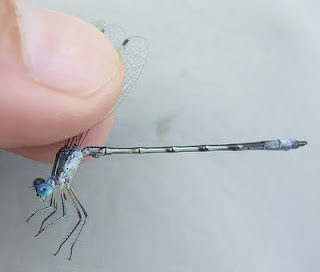 ... and the claspers which provide its common name: 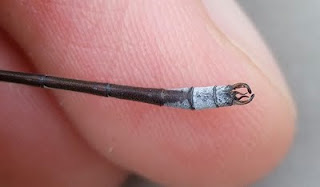 While walking back to the car along the road, a female Wandering Glider (Pantala flavescens) was found hovering: 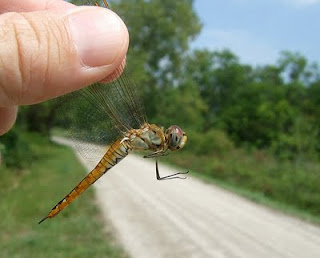 This great little park will require future visits. There is a lot of potential to find additional odonata species, and the prairie plantings provide great opportunities to see a great variety of insects.