In our quest for Canada Darner (Aeshna canadensis) in Wayne County, we have come up with a number of locations and specimens of the similar Green-striped Darner (A. verticalis). While there is a historical and possible photo record for Canada (CADA) for the county, we've had no luck finding this species over the last ten years. We've only found one Green-striped (GSDA), in 2003, prior to this year, when we found many.

Most field guides present differentiating these two species as fairly straightforward. We've found ID more problematic, although we are hampered by a lack of live CADA material to work with. This post will go over these two species, and (necessarily) feature the variability of GSDA that would complicate field ID.

Here are the characteristics typically cited to separate the two species.

Color of thoracic stripes: Usually blue in CADA, green in GSDA. However, male CADA often have stripes that are greenish ventrally or sometimes all green. Meanwhile, the rear stripe in male GSDA is sometimes blue-green dorsally.

Dot on thorax: CADA usually have a yellow dot between the two thoracic stripes. This feature is also sometimes present on GSDA. We have found it present at least half the time in our area.


CADA females come in a green-striped form, and some female GSDA are blue (rarely). Cold individuals of either species can be dull and confusing. Many guides agree that green females are probably impossible to tell apart without close examination in the hand.

Shape of thoracic stripes: Front stripe is supposed to be deeply notched in CADA, not so deeply notched in GSDA. The dorsal "flag" (the part of the front stripe that runs along the base of the wing) of CADA narrows, often becomes wider in GSDA, as is evident in the photos above.


Males, spot on abdominal segment 1: Usually only slightly pinched in CADA, deeply notched or bifurcated in GSDA. I've added this feature per Reuven's comment below. Here is a composite of GSDAs showing variability, with a red arrow in the first photo pointing out s1. 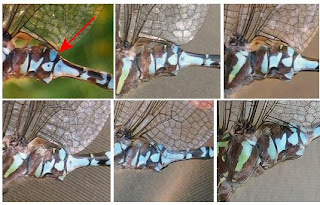 Certainly variable, but often distinctly "bi-lobed." I hestitate to link to online photos since I don't know if they are always correctly identified, but here are some shots that I believe are of genuine CADA showing s1.

Minnesota, s1 nearly entire.
Montana, s1 notched.
Ontario, s1 notched.
Presumed Montana, s1 deeply notched. This photo, by the way, is worth viewing original size, as there is the head of a hymenopteran latched on to one of the darner's legs!

While apparently variable in both species, this could be reliable, especially in combination with other features.

Face: Black band across the labrum in CADA, brownish edge in GSDA.


This seems like it also might be reliable, but we have not looked at enough CADA to be sure. One thing we've noticed about this feature, at least in GSDA, is the variability of facial markings. Many have random botches and spots. We wonder how prevalent this is in CADA, and if it muddies the diagnosis of labrum color. This photo of a putative CADA, also shows a weird blotchy face. Here are just a few GSDA faces. 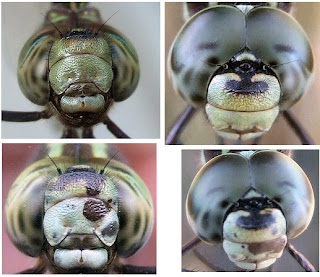 We have had more success examining these two species in the hand under very close magnification, but the keys and characteristics can be puzzling without experience or comparative material. Here are some of our experiences.

In males, the shape of the cerci are similar in both species. However, as most keys note, the top margin of the superior claspers of male CADA have tiny teeth; these are absent in GSDA. These usually cannot be seen in the field or a photograph, but are said to detectable by running a finger across the cerci. I'm not sure this would be a slam-dunk even for Helen Keller. These teeth are very tiny.


What we have found to be most obvious (once you know what you are looking at) are the "anteromedial process of each anterior hamule," or an aspect of the naughty bits. They are, in much more simple language, pointed in toward the rear in CADA and pointed at each other in GSDA. First, let's look at the diagram from DONA*. The red arrows show these bits, and the orientation is such that the top of the diagram is the direction of the heads of the dragonflies:

And to put this in some context, here is what it looks like. We used a Dino-Lite Digital Microscope to take these photos.


These things are very tiny and hard to see! But if you can get the right look, they are diagnostic.

By the way, although it is not pictured or mentioned consistently in all keys, both species have a little tubercle or bump on the top of abdominal segment 10. It's visible in the photo above of the male CADA cerci.

Most authors acknowledge that green-colored females of these two species can't be separated in the field, or with photos. DONA's key points us to the structure of the ridge of the genital valves, and provides us with this diagram:

These two look pretty similar. The shape of the cerci is different -- but they are often broken off. We haven't caught any candidates that still had their cerci. Those being absent, we weren't sure, even with the little arrows, precisely what structure we were supposed to be examining (in the hand, they have a lot of little ridges and flanges going on in those parts). Another diagram is helpful: 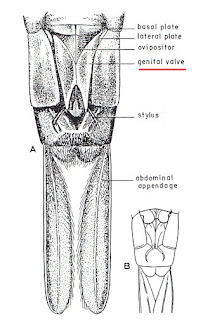 This shows that the genital valves in question are the things that the little hair-like styli come from. Once we saw that, we knew what we had to look at. The key notes that in CADA, the basal third of these valves has a weakly developed ridge, which is well developed in GSDA. We must admit, looking at a single specimen we were still uncertain. It looked kind of like either one of them. For what it's worth, here is a GSDA, with the contrast tweaked to show the ridge. 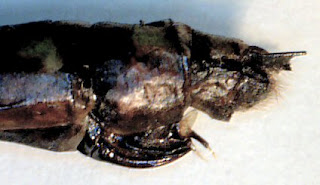