With early dragonflies on the mind that would make new records for the county, I headed to Maybury State Park in northwestern Wayne County on May 30th. My first visit of the year a week ago only provided a female Common Whitetail (Plathemis lydia). A few baskettails (Epitheca sp.) were patrolling the forest clearings. I caught one male and will try to ID it at a later date. It may be Common (E. cynosura) or Stripe-winged (E. costalis): 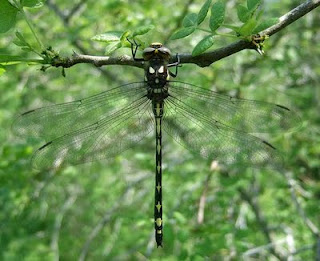 Next I'll look for this species in another county.
Posted by Darrin OBrien 3 comments
Email ThisBlogThis!Share to TwitterShare to FacebookShare to Pinterest

I was looking forward to making a post on an earlier date, but we've had an extremely cold and wet spring. I believe it's the 2nd wettest spring on record for this area.

Up through today (May 29th), I've only tallied 6 species of odonata of only several individuals. Below is my meager list of first dates: 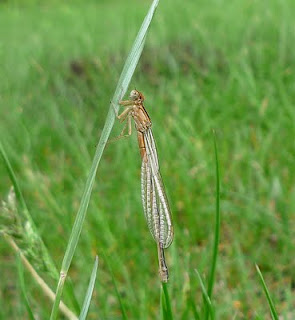 - baskettail sp. (Epitheca sp.) = 6+ on 5/29 at UM-Dearborn. These were likely Common (E. cynosura), but could have the possibility of being Stripe-winged (E. costalis).

- Dot-tailed Whiteface (Leucorrhinia intacta) = one young male on 5/29 at UM-Dearborn: 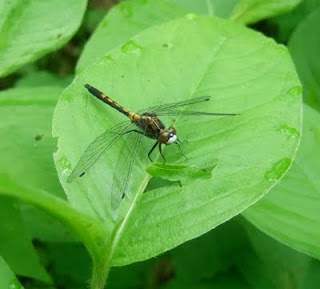 Don't worry, there is more to come. Although we could see a lower number of river and stream species this year due to the excessive flooding experienced this spring.
Posted by Darrin OBrien 4 comments
Email ThisBlogThis!Share to TwitterShare to FacebookShare to Pinterest

A couple of books have come out recently that are worth adding to any insect lover's library. Not only that, an Urban Dragon Hunter contributed a photo to each.

First up is the excellent Attracting Native Pollinators: The Xerces Society Guide to Conserving North American Bees and Butterflies and Their Habitat

. The Xerces Society, a well-respected invertebrate conservation organization, really went all out in this book. Chapters cover pollination, pollinators, and pollinator conservation, and every aspect of how to manage land, greenspaces, and gardens to provide nest sites, foraging habitat, and wintering sites for pollinators. Another section describes the bees of North America by family and subfamily. The photo illustrating the account of the genus Stelis (a cuckoo bee) was taken by Nannothemis in the Urban Dragon Hunter backyard. For a few years, we have photographed and tried to identify all the Hymenoptera and Diptera in the yard. We were happy to make this contribution to the Xerces Society, especially for such a terrific book. If you have even a passing interest in pollinators or landscaping for wildlife, get this book.

. This is a beautiful book that, ironically, does not cover all the butterflies of the continent. The first 60 pages or so provide an overview the Lepidopteran life cycle. Most of the remainder of the volume gives summaries of the six families of butterflies in North America with brief, representative species accounts. There are over 700 species of butterflies in N.A. (there is a list in the back of the book), but fewer than 100 are described. Nonetheless, these accounts are succinct but thorough and each features one or two excellent photos. Nannothemis contributed a shot of a Little Wood Satyr that appears in both the "self-defense" section and on the back cover of the book. This book will be released next month, and would make a great introduction for a new butterfly enthusiast.
Posted by JAC 0 comments
Email ThisBlogThis!Share to TwitterShare to FacebookShare to Pinterest
Newer Posts Older Posts Home
Subscribe to: Posts (Atom)
Give the Gift of Amazon Prime