A bee fly of my own 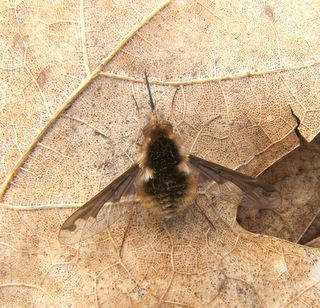 I've finally gotten a half-way decent photo of a Bombylius bee fly; this is probably B. major, a common and widespread (as in much of the Northern Hemisphere) species.

As adults, Bombylius feed on nectar by hovering over early spring flowers. The larvae are parasites in the nests of solitary bees, feeding on the food stores and larvae of the hosts. Thus, the adults must find the burrows of solitary bees before they are sealed up, and lay their eggs in them. It would seem most straightforward if Ms. Bombylius just went directly into the nest burrow, but I suppose that the hosts have all sorts of defenses against such an intrusion. Instead, the female Bombylius hovers over the hole and flicks her eggs inside. Wow. I've watched them searching for burrows, investigating what I presume must be likely-looking (from a bee fly's point of view) holes, the forceful breeze from their wings tossing and scattering grains of soil as if a tiny tornado was attacking a square-inch patch of ground. But so far, I've not seen the old ovum toss. I'll keep looking; I'm a bit taken by these insects. Stylurus says they look like little plush toys. It's a compliment not paid to many flies, I'm sure.

Here's a nice article on bee flies, featured as "Bug of the Month", where I found the Frank Cole quote above.
Posted by JAC 0 comments
Email ThisBlogThis!Share to TwitterShare to FacebookShare to Pinterest

The entry below is included in today's The Friday Ark by the Modulator, a carnival of photos that spans many taxa. Enjoy!
Posted by JAC 0 comments
Email ThisBlogThis!Share to TwitterShare to FacebookShare to Pinterest

While we wait for odonata 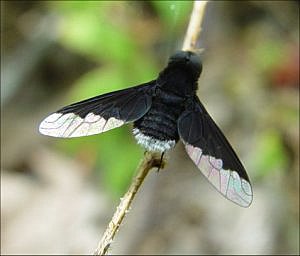 A bee fly. Not Hemipenthes sinuosa but perhaps Anthrax analis

The darner the other day is still the only ode I've seen so far this season. So I'll take this opportunity to post this excellent shot of a bee fly my friend Dr. Steve took last summer here in Michigan. Diptera are multitudinous, and I am, after all, an ornithologist, so I had no idea how to identify this one. But my particular jones is that I have to name and/or count just about all living creatures I encounter (a curse I'll have to write about one day). It wasn't until I was trying to identify another type of fly now buzzing about my study plot that I finally came across a photo that finally allowed me to pin a name on Steve's bug (to my great relief). I am fairly certain of the species, and even more confident of the genus. Comments from more knowledgeable dipterologists are welcome!

UPDATE: After contemplating this fly, with it's white-tipped abdomen, I decided I had been smug too soon. This was confirmed by Giff Beaton, ode guru of Georgia (who has a great page on bee flies), who wrote to me:

"I think it's very likely to be Hemipenthes, but I don't think it's sinuosa. That is a pretty common species here, and I have never seen one with a white-tipped abdomen. Definitely not Ogdocera, either..."

Among Michigan Bombyliidae, I've now settled upon Anthrax analis based upon this one lonely photo.
Posted by JAC 0 comments
Email ThisBlogThis!Share to TwitterShare to FacebookShare to Pinterest
Newer Posts Older Posts Home
Subscribe to: Posts (Atom)
Give the Gift of Amazon Prime