The mystery of meadowhawks, redux


In 2010, we posted about the difficulties presented in identifying many Sympetrums, especially in eastern North America. With the increasing popularity of dragonfly ID and photography, and posting same on social media and citizen science websites, we have updated our post with some new data and references. I'll repeat the bottom line here, and you can read more at the original posting:

Over most of eastern North America, the most common meadowhawk species (Ruby, White-faced, Cherry-faced, and Jane's) should not or cannot be identified to species from a photograph -- especially when immature. Often, they cannot even be identified to species in the hand because the structural characteristics of their genitalia are intermediate due to hybridization. In fact, DNA analysis has shown that some of these "species" may not be full species, or may still be undergoing speciation.
Posted by JAC 0 comments
Email ThisBlogThis!Share to TwitterShare to FacebookShare to Pinterest 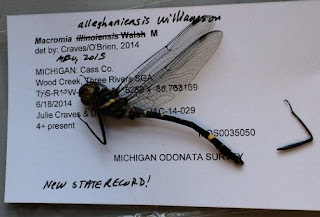 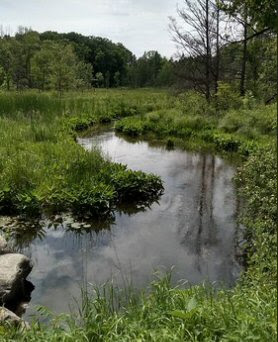 We published a paper about refinding Tiger Spiketail (Cordulegaster erronea) in the Great Lakes Lakes Entomologist (50(1-2):1-5 · January 2017) a couple years ago. I thought it would be worthwhile to note this paper given similar habitats that may be occupied by Tiger Spiketail and Gray Petaltail (T. thoreyi) that we found at Fort Custer Training Center in Kalamazoo County, Michigan.

In 2017, I searched habitats near the two-track in order to find potential breeding site(s).   The most promising location was south of the area with a seep flowing from the hillside and forming a rivulet.  This traveled a couple hundred meters before ending in a marshy / fen area.  Further downstream is a large fen area.

Looking for a Gray Ghost

Gray Petaltail (Tachopteryx thoreyi) is listed as state threatened in Michigan, as noted on the MNFI website.  Prior to living in Michigan, I'd only observed the species once.  It was an individual that flew by and landed on a bridge over a stream in the knobs of Kentucky.

Over the past several years, we've been searching to confirm this species' presence in some historic locations and other spots suggested by locals.  It appears that the petaltail only inhabits the SW area of Michigan, given the records and searches throughout the southern tier of counties. Prime flight season may be mid-June through mid-July.  For me, the 3rd weekend of June is prime time.

- Grand Mere State Park:  I heard petaltails were present in the hillsides near Stevensville in the years prior to the construction of I-94 was constructed. The wetlands in the SE area of the state park were ditched decades ago, but may have seeps which provide habitat.  During a couple visits, no individuals were observed, but habitat is interesting.

- Three Rivers SGA: This state land has habitat in Cass and St. Joseph counties.  There is a 1989 voucher from Wood Creek in Cass County.  Multiple individuals were observed around June 18, 2016, in the same area.  Some were hunting over Wood Creek, while others were most easily found perched on conifer trunks in dappled sunlight.  Scanning trees with binoculars from the creek seemed to be the best method, but a couple times I had a patrolling/hunting individual fly past along Wood Creek.


Additionally, the habitat along Mill Creek, west of Preston Road in St. Joseph County looks promising.  Many seeps and fen habitat is present, but is somewhat difficult to access:


- Dr. T. K. Lawless County Park: I was told this park may have appropriate habitat and when visiting out of season, there were some interesting hillsides that seemed to have seeps along trail #4.

- Fort Custer Training Center:  I was informed that that petaltails had been observed in an area of hilly, forested area with seeps.  During multiple visits over a couple of years, none were observed. However, other interesting dragonflies were found.  It is possible that petaltails are present, but we had no luck.


-  Watkins Lake State Park: Additional searching of prairie fen areas and nearby hillsides may be worth further searching. This may be a bit of a stretch since petaltails have not been found at Ives Road Fen through the years.


Gray Petaltails are tough to find in Michigan, even when in the proper habitat. For example, it took six visits before I saw the first petaltail at Three Rivers State Game Area.  As time allows in future years, I hope to revisit locations that looked appropriate but didn't turn up any individuals.
Posted by Darrin OBrien 0 comments
Email ThisBlogThis!Share to TwitterShare to FacebookShare to Pinterest
Newer Posts Older Posts Home
Subscribe to: Posts (Atom)