We are finally getting at writing a paper on the Odonata of Wayne County, Michigan. The ten years of collecting has been fun. The digging very meticulously through old literature and verifying specimens -- not so much.

The University of Michigan Museum of Zoology has the second largest collection of Odonata in the country, with something like 300,000 specimens of around 3,000 species. There is also a boatload of old literature, correspondence, and journals, and best of all, a collection manager that rocks: Mark O'Brien. I (Nannothemis) am in the home stretch of determining which species to include in the Wayne County checklist, so it was time to once again head up to the UMMZ and tie up some loose ends.

The main goal was to verify the identity, or existence, of some specimens mentioned in the literature by three of the earliest authors of checklists of Michigan odes: Hermann Hagen (late 1800s), Francis Byers (1920s), and Edward Kormondy (1950s). Sometimes a single species would be mentioned by Hagen and repeated by Byers and Kormondy, who may or may not have actually examined some specimen that was still (at that time) in the UMMZ. Such was the case with Spiny Baskettail (Epitheca spinigera). From its first mention by Hagen in 1875, a single specimen from Detroit was mentioned in several papers as well as correspondence. Unfortunately, it was identified by at least four different names and three different species. Mark and I looked high and low for it. We did find another specimen that was usually mentioned as part of the same group, in a drawer of type specimens. 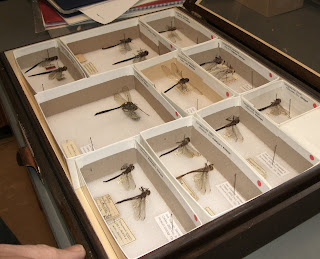 In the early 1900s, it was used to describe "Tetragoneuria morio" later considered a synonym for T. cynosura, now called Common Baskettail, Epitheca cynosura. This specimen was from Maine. We never did find the Detroit specimen in order to figure out what species it may have been. It might have been eaten by a mouse around 1910, according to some correspondence in the files. 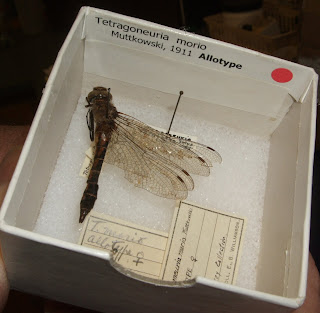 All of the Michigan specimens in the collection are databased, but there were a few that I wanted to double-check. The identification of most has been checked by an expert somewhere along the line, but frankly after a lot of scrutiny I had found that some of them were a little sloppy (sorry, Kormondy).

Today, adult Odonata specimens are stored in a clear envelope with a card that includes all the collection data. Back in the day, however, they were folded up in paper triangles. Lots of them. Boxes and drawers of them. For common species, such as Dusky Clubtail (Gomphus spicatus), we had to mine through a ton of envelopes to find the one I was looking for. It was one that had been misidentified in the literature, and corrected by a later author. I just wanted to make sure it was right. 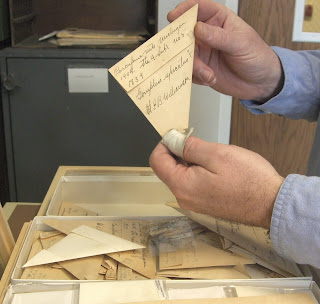 One other task was to try to figure out the exact locations of some of the specimens. In particular, William W. Newcomb did lots of collecting in southeast Michigan in the early 1900s. Some of his specimens are from Wayne County, and sometimes used now non-existent street names for specific sites. I believe I know where most of them are using old maps, but I knew the UMMZ had some of his old journals. Unfortunately, the first one available was dated 1911, and I was aiming for 1903-1905. The available journals were written in beautiful, small script, often illustrated with these carefully drawn maps: 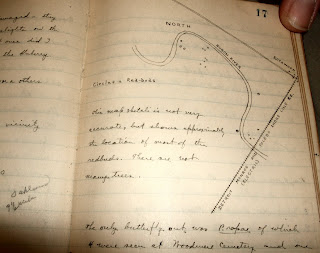 I didn't find what I was looking for, but one day, I'll just have to read through Newcomb's journals. They are gorgeous, and highlight plenty of places right around home.

In the end, I resolved most of my questions. There will be about a dozen species that have been attributed to Wayne County in past literature that we were unable to corroborate with a specimen, or turned out to be misidentified. These incorrect records just keep perpetuating themselves in the literature until someone is determined to finally figure out what is really what.

The final tally, by the way, is 89 species now represented by valid vouchers, all in the UMMZ. We've found over 30 of them. There are 5 additional species we consider "hypothetical" as we have sight or photo records, but no specimens. We'll be putting together a new checklist soon.