The mystery of meadowhawks 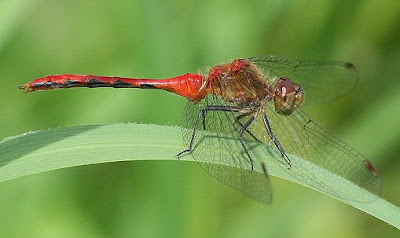 [Updated July 2019 to include additional data and references]

In our post Identifying Odonata from photographs, we talked about one of the more vexing field IDs around: the red meadowhawks in the genus Sympetrum. Since meadowhawks are a signature species of late summer, I thought they would be a good start to what we hope is a series on difficult genera.

Here is the bottom line: Over most of eastern North America, the most common meadowhawk species (Ruby, White-faced, Cherry-faced, and Jane's) should not or cannot be identified to species from a photograph -- especially when immature. Often, they cannot even be identified to species in the hand because the structural characteristics of their genitalia are intermediate due to hybridization. In fact, DNA analysis has shown that some of these "species" may not be full species, or may still be undergoing speciation.

Harsh and disappointing news to those coming from the world of birding where most species can be identified by sight or sound and added to a list, or those unable to or opposed to netting or collecting insects and investing the effort to carefully examine and key them out, or submit them to those who will.  Of course, your list is your own, and if you would like to call reddish-faced meadowhawks Ruby or Cherry-faced, that's all good. But we think it is a disservice to our understanding of the distribution, abundance, and species limits of Sympetrums for folks to so confidently and publicly (mis)identify meadowhawks. What follows is a short explanation of the difficulties of identification of some of the common eastern species, and some resources for additional reading.

We'll focus on the species that most commonly cause confusion in eastern North America (although some also cause problems in the west, and there are other species that also sow confusion!) :

Generally, we've been told that the field marks to look for include the pattern of black on the abdomen, color of the face, and color of the legs. There is geographic variation for some species in some characters. When immature, meadowhawks are largely yellowish-orange, with facial colors in particular not fully developed or helpful.

In the east, the face of CFME is brownish and this species cannot be separated from RUME (face yellowish to brownish) in the field. In the hand, examining the hamules under good magnification may help. However, there are intermediate forms (with intermediate-looking hamules) that cannot be identified to species. Some consider them hybrids, a subspecies of CFME, or (at least along the Atlantic seaboard) a separate species, JAME. Genetic work on these three species is inconclusive.

Mature WFME have very white faces, which should be helpful. Until maturity, though, eastern forms cannot be distinguished from CFME in the field. Even in the hand, immature female CFME and WFME cannot be separated in the east, as their subgenital plates are essentially identical (in the west, the subgenital plate of CFME is quite different from eastern forms). WFME also hybridize, or have intermediate forms, with both RUME and CFME. 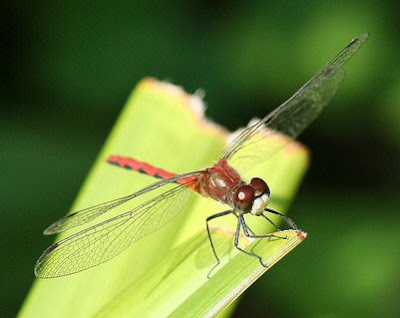 Here is what Ken Tennessen had to say about the genus in his recent book: "...the status of several taxa based on adults remains controversial, including morphological evidence of possible intergradation between adults of S. internum, S. obtrusum, and S. rubicundulum... Pilgrim and von Dohlen (2007) were unable to find consistent species-level differences between adults of S. janeae, S. internum, and S. rubicundulum based on either morphological or DNA data; their analysis indicated that there is gene flow between [these species] or that these forms are the result of a recent radiation."

There is a more distinctive meadowhawk, Sympetrum semicinctum, the Band-winged Meadowhawk (BWME), found across most of the central and northern U.S. It varies geographically, causing problems in some areas. In the east, identification is usually pretty straightforward as the wings are amber-colored to the nodus. However, some RUME west of Ohio may have amber wing bases, sometimes as extensive as BWME. In the Great Plains and to the west, Band-winged Meadowhawk wings may be colored, clear, or diffusely colored. In the center of the country, clear-winged forms are probably not separable from CFME and RUME. The western forms are often considered their own species, S. occidentatale, but genetic work indicates that S. occidentatale is not a valid species. 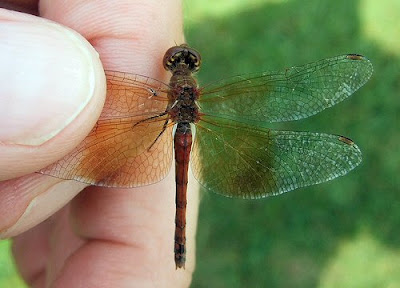 An eastern Band-winged Meadowhawk.
In the Great Plains and to the west, wings may be colored, clear, or diffusely colored. In the center of the country, clear-winged forms are probably not separable from CFME and RUME. The western forms are often considered their own species, S. occidentatale, but genetic work indicates that S. occidentatale is not a valid species.

Likewise, in Europe, there are no good morphological characteristics to distinguish Common Darter (S. striolatum) and Highland Darter (S. nigrescens), and genetic work was also unhelpful.

Beware of the little red odes of summer.

This has nothing to do with taxonomy, hybridization, or identification, but I came across it in my research and had to throw it in because I liked the title:

I had a Sympetrum sp.land on my very urban bird bath this evening. It stayed only a minute and then flew off high into my Noway maple. It had a golden head and a red body. Though I'm sure I'll continue to have plenty of questions, these posts are very helpful.