Taking to the water

Part of a grant I received to do baseline odonata survey on USFWS land included larval sampling. It's still a little early in the fall (we discovered) to get a lot of semi-mature (and therefore identifiable to those of us who specialize in adults) larvae. But we decided to spend a glorious autumn day seeing how it would go.

We sampled several areas. One was a portion of the Detroit River. Stylurus is a champ: he waded right in. That's the north end of Humbug Island in the background, and Grosse Ille in the far left background. This is near the southern end of the river. The substrate here is alternately sandy and silty, with the remains of wooden planking installed by a private hunt club decades ago still sunken in the muck in a few places. That's (mostly) duckweed on the river, not algae. 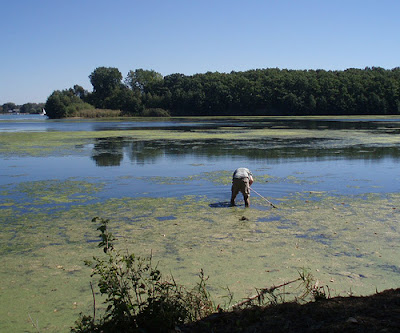 A main objective was to see what is able to breed in an Army Corp of Engineers ditch, created to shunt an old creek, currently nearly entirely underground in a sewer pipe, to the Detroit River. Although mucky and peppered with trash, this little shallow creek has small fish, several kinds of gastropods, freshwater scuds, water boatmen, many aquatic beetles, and some odonate larvae. Aside from a variety of damselfly larvae, we got about a dozen larger specimens of darners and skimmers. Still, not as many or as diverse as we would have hoped. However, this creek is slated for restoration, hence our baseline survey. Here, a friend we enlisted to slog through the mud checks out his haul. 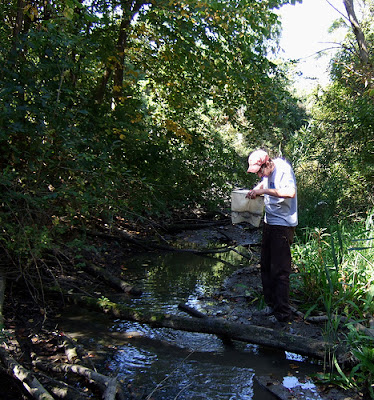 I stayed relatively dry, sorting through the trays of gungus that the men brought me. Note to self: bring a folding table and chair next time. Kneeling on the ground hunched over the trays was bullshit. At least I remembered my reading glasses. 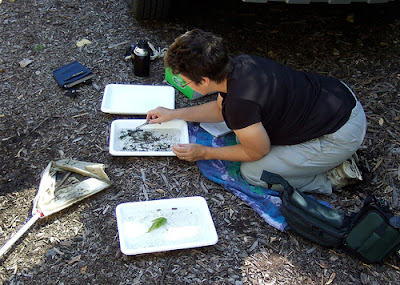 Once finished, we couldn't resist tromping around one of the areas where we typically do transects counting adults. We both saw a nice gomphid -- Arrow Clubtail, Stylurus spiniceps or Elusive Clubtail, S. notatus -- but were unable to net it to confirm its identity. There were a lot of Wandering Gliders (Pantala flavescens), some Common Green Darners, Anax junius and Black Saddlebags, Tramea lacerata, a few Common/Eastern Pondhawks, Erythemis simplicollis, and lots of bluets, mostly Familiar (Enallagma civile) or Tule (E. carunculatum) with a few Orange (E. signatum). And the typical Aeshnas for the date and place: A. umbrosa, Shadow Darner, and A. constricta, Lance-tipped Darner. 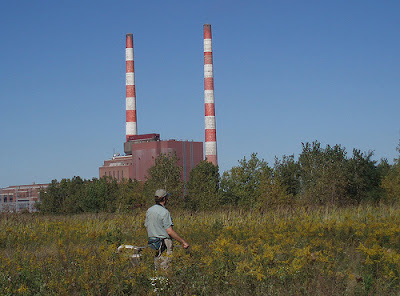 The next installment might just be about what we found, once we key out our three dozen or so specimens.
Posted by JAC 0 comments
Email ThisBlogThis!Share to TwitterShare to FacebookShare to Pinterest
Newer Posts Older Posts Home
Subscribe to: Posts (Atom)
Give the Gift of Amazon Prime