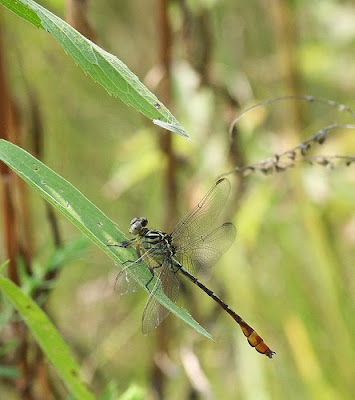 Of the many new county records we have obtained, one of our favorites is the Russet-tipped Clubtail, Stylurus plagiatus. (When we found it in 2001, it was actually a first state record, but we've only just determined that what everyone thought was the first state record, from Alpena Co., was an error.) Darrin even adopted it as his nom de plume/avatar for this blog.

Where: We are concentrating on populations in MN, IA, MO and all states EAST of the Mississippi and north of (and including) TN and NC -- all the states shaded in yellow below; eastern Canadian provinces, too, although they are very rare in Canada. 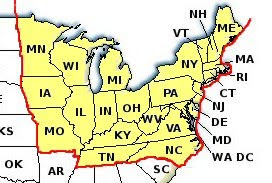 What: We would like precise geo-coordinates of locations where you have seen adult Russet-tipped Clubtails, S. plagiatus.
When: Anytime within the last 10 years.

How: Fill out and submit our nifty online form at Wufoo. You can fill out one form per area, even if you've had multiple sightings over multiple years. Just let us know that in the Notes section of the form. In fact, since we're limited in the number of fields on the form, please provide as much detail as you like in the Notes section!

Why: We'd like to verify some of our suspicions regarding the apparently very specific habitat configurations and requirements of adult Russet-tipped Clubtails. In order not to bias any data submissions, we won't reveal our hunches here right now. If we are able to obtain a good sample, we'll compile our data and see what shakes out.

Our intention is to share this data, via publication and this blog, in order to help preserve and manage for populations. This is driven by our concern that this species may already have been extirpated from the spots where we originally found them. The reduction (or loss) of this population has prompted us to do some work on the requirements of this S. plagiatus, as it is a species of special concern in Michigan.

Here at the northern portion of the range of Russet-tipped Clubtails, peak flight time is mid- to late August, but they will be on the wing into September. So if you don't have any old records to provide us, now is a great time to get out and look for this handsome dragonfly and let us know where you found it!
Posted by JAC
Email ThisBlogThis!Share to TwitterShare to FacebookShare to Pinterest

I'll post this to our local NJ odes message board. They occur in NJ mostly on the coastal plain: http://www.njodes.com/Speciesaccts/clubtails/club-russ.asp

Having never seen one myself, I can't add anything more.