We didn't really intend to go out today, the weather was supposed to be lousy. When the sun came out, we decided to go up to the northwestern corner of the county for a brief visit to the retention ponds at a partially developed office complex. There are only a couple of office buildings up, and once all the outlots are filled these little marshy areas will be inundated by parking lot runoff and be ruined. Meanwhile, they are clinging to their character, which must be influenced by some acid water or boggy heritage. Here, in this most unlikely place, we've found boggy species: Eastern Red Damsel (Amphiagrion saucium), Sedge Sprite (Nehalennia irene), Citrine Forktail (Ischnura hastata), and my namesake Elfin Skimmer (Nannothemis bella). All were county records and with the exception of the forktail, all have been found no place else in the county. Today the red damsels were on the wing, even though the basins/marshy spots were fairly dry. We saw the first Dot-tailed Whitefaces (Leucorrhinia intacta), Eastern Pondhawks (Erythemis simplicicollis), and Twelve-spotted Skimmers (Libellula pulchella) of the season, and Eastern Forktails were numerous.
Posted by JAC 0 comments
Email ThisBlogThis!Share to TwitterShare to FacebookShare to Pinterest 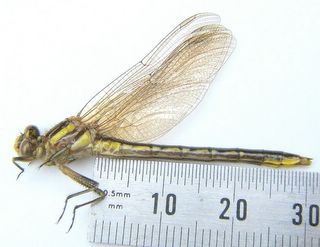 Another stab at a decent voucher for Lancet Clubtail today at Sherwood Park. Of course, by the time I got off work and we got out there, the sunny, calm day had turned cloudy, windy, and threatened rain. This was the only dragonfly I saw, as we were walking back to the car, but it was the sought-after species, the dainty little Lancet Clubtail. 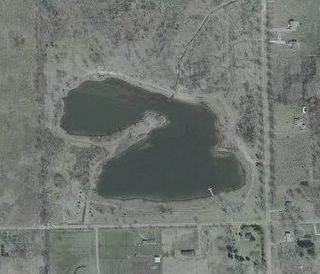 Finally, it's been sort of warm for a few days -- something must be emerging! Stylurus and I went to some of our favorite sandy ponds to look for those annoying early gompids. First stop, Oakwoods Metropark. We've had some very good gomphids here, including the state's first record of Flag-tailed Spinyleg (Dromogomphus spoliatus), although we were unable to voucher the first record. Stylurus decided he needed to stand around in the woods to listen for Acadian Flycatchers, so I kicked around in the weeds near a pond. Only a few glistening-winged teneral odes flew up, but I snagged this one, a female Pronghorn Clubtail. In 2003, we vouchered the first county record of this species at the same location. 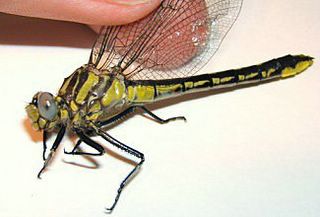 Off to Sherwood Park, a strange little township park used for fishing and off-road vehicles. It has a large pond surrounded by sandy two-tracks, fields, and woods. Stylurus snagged one of these snoozers, a female Dusky Clubtail, a dull species we found here last year. 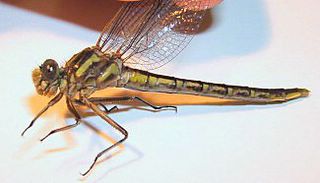 Don't be impressed -- I can't recognize these in the field, or even in the hand. I had to suffer over some keys back at home. Female Gomphus all have quite different vulvar lamina (the structures under the 9th abdominal segment that hold eggs in place during ovipositing), and G. spicatus has a very distinctive convex, almost tri-lobed occiput, shown in the photo below. 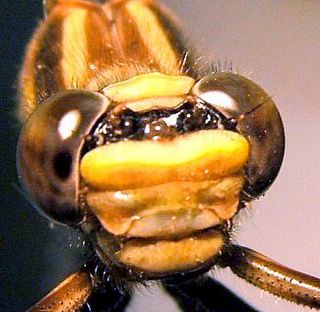 Last, and least in size but not in importance, I netted a very teneral female gomphid that was smaller than the other two. By the time I got it home, it had "deflated." Nonetheless, the vulvar lamina and occiput were still distinguishable. That and the very small size (hindwing 25 mm and abdomen only 30 mm) helped me identify it as a Lancet Clubtail (G. exilis), a new county record, our 40th for Wayne Co. (although two are sight records), bringing the county checklist up to 90 species.

Not much else flying. The ubiquitous Eastern Forktail (Ischnura verticalis), a few Common Whitetails (Libellula lydia), and one teneral Calico Pennant (Celithemis elisa). The day quickly turned windy and cloudy, ending our adventures. But the official season seems off to a good start!