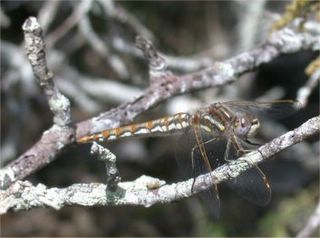 Sunday there was a chilly wind blowing. We hiked in a park in San Antonio and were high up on a hillside, a long way from water, when we were surprised to see a dragonfly crossing our path. It was that well-known wanderer, the Variegated Meadowhawk (Sympetrum corruptum). My man Stylurus got a decent shot of it perched. A little further up the path a small skipper also let us take its picture. I first identified it here as a female Dun Skipper (Euphyes vestris), but it might be a Clouded Skipper (Lerema accius) -- comments welcome . It warm up after that, but there is just so little natural habitat and public land – all ranches that are heavily grazed – and since it’s still about a week from peak wildflower blooming we were having a hard time finding leps. We stopped at the LBJ National Historic Site and walked the lawns and found many Dainty Sulphurs (Nathalis iole), but not much else. Our last butterfly was a good one, however, a nice California Sister (Adelpha bredowii) cruised by. Odes are still scarce this early in the season. We scanned the creek at the site, but only found a couple of Enallagma and a single dragon flew by, perhaps an Epitheca. That was it for bugs. We did get our target birds, Golden-cheeked Warbler and Black-capped Vireo. 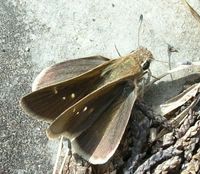 After yet another 2 inches of snow a few days ago, a sneak preview of spring was in order. We're in the Texas Hill Country, and this morning we hired a guide to go into the Halff Brothers Ranch in Bexar Co. The main thrust was to see a Rufous-capped Warbler that has been wintering there along the Frio River. Looks like the warbler has moved on, but we did get a few life odes. Coolest were several Pale-faced Clubskimmers (Brechmorhoga mendax) patrolling the river; a couple perched obligingly for us. A quite teneral Plains Clubtail (Gomphus externus) landed on our guide's shirt, and a Dusky Dancer (Argia translata) was posted over the moving water.

We got a couple of really nice new leps, out of the nearly 20 species we saw: Common Streaky-Skipper and Nysa Roadside-Skipper...check out our guide Martin Reid's photos of these species, taken at Halff Brothers Ranch. The owners of the ranch are looking to preserve the habitats (many of which are quite pristine) and get into ecotourism. Many kudos to them! It's a very cool place.
Posted by JAC 2 comments
Email ThisBlogThis!Share to TwitterShare to FacebookShare to Pinterest

Although this weekend will be the first of spring, the winter odonata hiatus seems to be going on and on and on. We had snow overnight last night. Waterfowl are skidding across frozen ponds, but I know underneath the ice there are scary-looking odonata larvae waiting to emerge.

A recent article in Birding magazine about butterflying, where author Jeffrey Glassberg made some of his frequent anti-collecting comments, riled up the lepidopterist groups. Glassberg, from what I can see, is generally not respected by most serious entomologists because of his devisive stance on collecting (or even netting) butterflies. That made Dennis Paulson's recent post to the Odonata-L listserv on ode collecting even more timely and relevant. I reprint it below, edited for space:

I am supplying a colleague with material of some fairly common species for DNA extraction, so I went though my collection to find (a) all the species of the genus, and (b) recently collected specimens, the ones that are most valuable for this purpose.

I discovered that I don't have much in the way of recently taken specimens of some of these species, just because they are common, and I only have so much room in my collection. Many specimens are decades old. Fortunately, I saved one or two from most areas I've visited recently, so I could supply all species for analysis, but if series from an individual population or a limited geographic area had been desired, the project would be out of luck.

The need for samples right up to the present has been made in other taxonomic groups, in which chemical changes in the environment have been monitored by analyzing museum specimens. So my recommendation would be for us to continue to preserve specimens of common species from throughout their ranges, so they will be available to researchers of the future.