Yesterday I was out in the field, doing a bird survey near our big metropolitan airport on a largish plot of vacant land, happily without any "no trespassing" signs. It was mostly scrubby -- old farmland -- with some woodland border. I was not carrying a net, camera, or even my bug binos. After I had wandered nearly as far from my car as I could go, I came to a spot with deep mud-filled ruts. The margins had a lot of horsetail, some spots had a few cattails and other aquatic plants. Off-roading is apparently most fun when you can get muddy and rip up vegetation most effectively.

I flushed a few teneral meadowhawks (Sympetrum sp.), this seemed like it might be on the cusp of being early. They were just old enough that I couldn't catch them by hand, and I wasn't even wearing a ball cap, which would have worked. There were also some pretty little spreadwings around, later identified as mostly Lyre-tipped (Lestes unguiculatus) with a few Emeralds thrown in (L. dryas). As I was perusing them, another meadowhawk caught my eye. A half-size larger than the others, the abdomen lined with pale spots bordered in black. 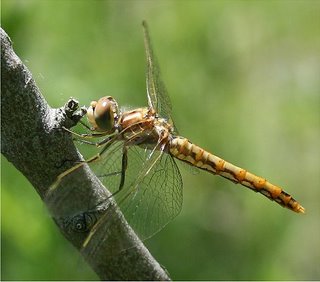 Variegated Meadowhawk (S. corruptum)! We've been looking for this species for years, and it is more common in the western half of the U.S., and usually only appears here as a late-summer vagrant, as they are strongly migratory. There are 41 specimens in Michigan, and only two records for Wayne County: one from 1926 and the other from 1931.

This find necessitated a long trek back to the car for my gear and a return trip. It didn't take me long to relocate "the" meadowhawk, which I secured after a short pursuit. After I soon discovered that while the other species (later found to be Ruby, S. rubicundulum) were the most numerous, I was able to flush quite a few corruptums. Many were only hours old, they were clearly emerging along with the others. Last fall there must have been one or more vagrants in the area that laid eggs in this damp, scrubby field. The photo above isn't the best, but it was taken with my regular lens...the macro is in the shop after the involuntary dunking episode.

Of the 91 species recorded for the county, there are now only 11 which we have not found; I think only perhaps half of them probably still exist in the county. Another serendipitous find!
Posted by JAC 0 comments
Email ThisBlogThis!Share to TwitterShare to FacebookShare to Pinterest

Yes, I would have updated a couple days ago with photos and a field trip report, but I managed to submerse myself in a river -- twice -- camera, cell phone, and all. Remarkably, the body of my Canon Digital Rebel XT did not take on any water (the lens is another matter) and works fine. But I didn't want to give it a try until I was sure no damage had been done. Moving right along...

Stylurus and I spent the day at several locations along the Little Barren River, south branch shown below, near where the east, south, and main forks come together. 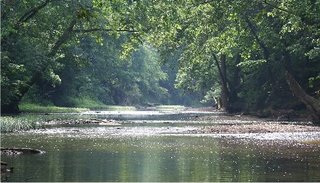 I can't think of a better way to spend a day than walking along a beautiful river, cool water at your feet, hot sun through the trees, especially when being serenaded by Louisiana Waterthrush, Acadian Flycatchers, Summer Tanagers, and Kentucky Warblers.

We chose river locations in order to see some interesting gomphids. This location featured an old friend from home, the Black-shouldered Spinylegs (Dromogomphus spinosus). They were all over. 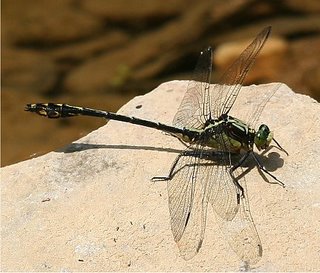 The substrate at this location was both sandy and rocky, and we decided to check out a more riffly, rocky area of the south fork. At the tops of most riffles there was a good-sized gomphid, which reminded me in flight of an Arrow Clubtail (Stylurus spiniceps). They were, however, Handsome Clubtails (Gomphus crassus), a species new to us which does not occur in Michigan.

At one point, Stylurus saw a crassus grab a small gomphid which he had just seen land on a flat rock: a least clubtail, Stylogomphus sp. I parked myself by the flat rock and waited. I was finally rewarded when a tiny, delicate clubtail perched briefly before going after a small insect. This was Stylogomphus sigmastylus, the Interior Least Clubtail, split from S. albistylus (now Eastern Least Clubtail) in 2004 by Ellis Laudermilk and Carl Cook, our DSA 2006 hosts. While both species occur in Kentucky (with hybrids) and can only be distinguished in hand, apparently all that were examined were S. sigmastylus, so I will presume that's what we saw. Hey, this is just my personal trip list. If I were being official, I'd have to net one.

Although we had no chances to catch a Stylogomphus, after many attempts we finally netted a Handsome Clubtail to take a look. I hadn't had many good opportunities, and eventually I made what I thought was a perfect swing. Stylurus was watching, and told me I narrowly missed. "Really?" I exclaimed, "I was sure I had it!" A minute later, after moving upstream, I heard a rustling in my net -- I had caught it. It was indeed handsome in the hand, and we let it go to annoy other people. 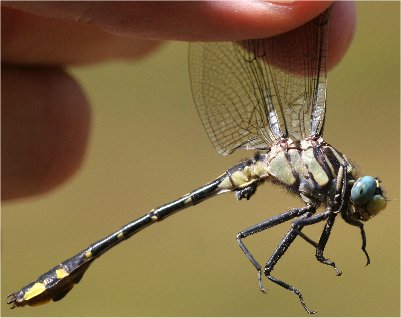 One of the coolest odes you are likely to see in the U.S. is the Dragonhunter (Hagenius brevistylus). Stylurus had seen one in Lenawee Co. in Michigan, but I missed it. There was at least one patrolling the Little Barren, and we located it perched on a twig, low over the water. My photos are from behind, and so do not do it proper justice. After John Abbott took some photos, it lumbered off towards Stylurus, who netted it. Holy buckets! This was the only dragonfly I've ever held onto which was actually hefty. The wing veins were as thick as some odonata legs, and the legs were as thick as toothpicks. This was one impressive bug. We released him to terrorize every other dragonfly on his stretch of the river. Be sure to click on his photo, below, to check him out in detail. 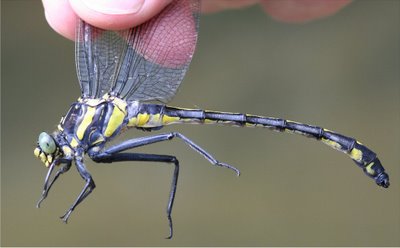 It was shortly after this that I slid on an algae-covered rock and "cooled off." It was late afternoon at this time, so we headed back to the hotel to dry off the electronics and change for the group BBQ at Sulphur Well, which was fun even though it was in a dry county. We were hoping to see some shadowdragons (Neurocordulia sp.) at dusk, but alas it began to thunder and rain just before that time. We had to say our goodbyes; although there would be one more day of field trips, we had to head home.

We really look forward to going to other odonata meetings -- the programs were informative, we learned a lot from the many great, friendly experts we met, and having precise guidance on where the odes were in a strange state was a ton of fun. Next year's DSA is in Arizona...
Posted by JAC 3 comments
Email ThisBlogThis!Share to TwitterShare to FacebookShare to Pinterest

Greetings from beautiful central Kentucky, where Stylurus and I are attending the 2006 annual meeting of the Dragonfly Society of the Americans. The meeting location is in Cave City, just outside Mammoth Cave National Park. There are about 60 people here from many states, and it’s already been fun to meet odonata experts that I’ve corresponded with in the past, especially Ellis Laudermilk of the Kentucky State Natural Preseves Commission; Dennis Paulson, recently retired from the University of Puget Sound, and an expert on Neotropical odonata; Bob Glotzhober and Dave McShaffrey, of the Ohio Odonata Survey and authors of a great book on Ohio odonata; Ed Lam, the author and illustrator of stunning The Damselflies of the Northeast, the best example of the intersection between art and science that I can think of; and Nick Donnelly, longtime odonata researcher.

Today after the business meeting we heard four papers:
There was also a workshop by John Abbott on current features and ambitous future plans of Odonata Central, and an amazing presentation of his photos of South African odonata, which I mentioned in a previous post.

Tomorrow: Field trips. The Little Barren River is nearby, and the list includes boatloads of gomphids. Hopefully, the weather will cooperate and we will get a few nifty pictures.
Posted by JAC 0 comments
Email ThisBlogThis!Share to TwitterShare to FacebookShare to Pinterest
Newer Posts Older Posts Home
Subscribe to: Posts (Atom)
Give the Gift of Amazon Prime