A washout in Panama

We made a trip to Panama in late November-2010 and stayed at The Canopy Tower. (If you haven't been to the rainforest, this is a great place to get an introduction.) 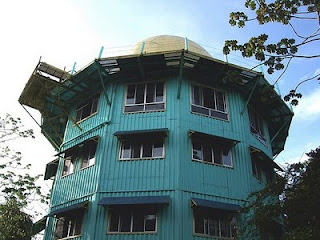 Our intent for this trip was to visit Pipeline Road regularly and record the various insects and birds for a few days.

It was the end of the rainy season so we expected to have rain for a bit each day. What do you expect in the rainforest? However, we didn't take into account that it was a La Nina year. The first day or two of our stay had a bit more rain that we'd experienced in previous trips which was no big deal.

However, the remainder of the trip involved rain, with only short periods of hot, humid weather. We didn't find many dragonflies during the limited "dry" periods. Following is a list of the locations we visited and the relatively few odes encountered.

Plantation Road in Soberania National Park:
The trailhead to this great path is at the base of Semaphore Hill (where The Canopy Tower is located).

On the morning of November 26th, we hiked ~3km of the path and found a few individual dragonflies. The mammals were the most numerous with a troop of Mantled Howler Monkeys and White-faced Capuchins lounging over the trail. 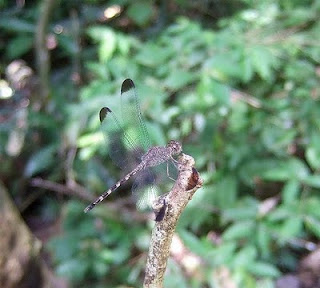 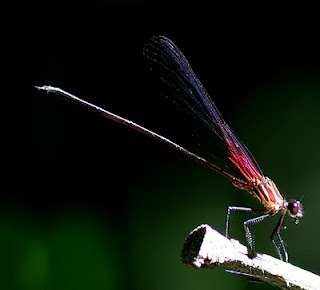 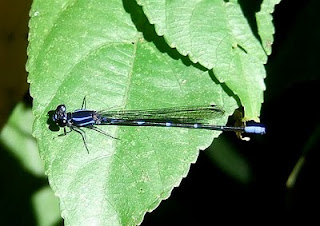 Two female Blue-fronted Setwings (Dythemis multipunctata) were found at ~1.5km. Here is one: 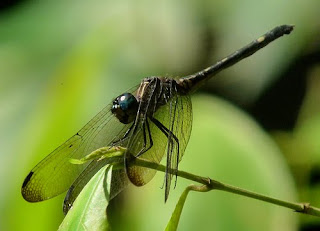 On the afternoon of November 28th we returned and found dragonflies to be gathered at, or near, the trailhead. 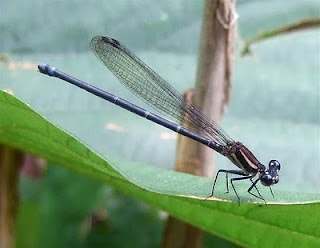 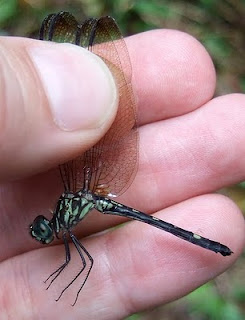 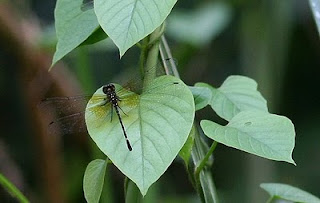 Additionally, there were many saddlebags (likely Striped, Tramea caverti) and gliders (Pantala sp.) working the open area above the parking lot for a couple hours before sunset.

The Ammo Dump Ponds near Gamboa have great potential for a variety of odes. A brief afternoon visit in the rain on November 26th provided a couple species. 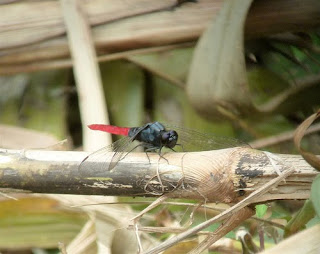 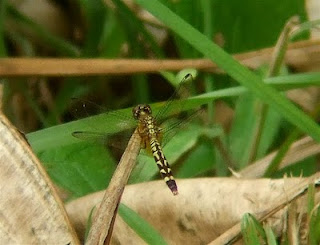 The Discovery Center is a great destination along Pipeline Road. This building and trails opened a few years ago. Brewed coffee is sold on the porch at the visitors center (a great relief from the drenching rains). The trails pass a couple small creeks and there's an overlook at a lagoon.
On the morning of November 27th, we found a few individuals before the rains arrived for the day. 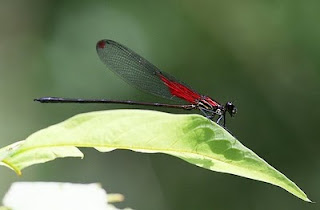 One male Argia (likely pulla) was found near Lake Calamito: 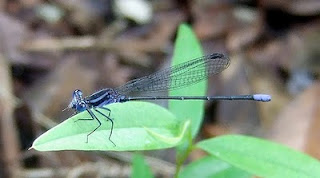 One male Blue-fronted Setwing (Dythemis multipunctata) was found at the stream near the visitor's center: 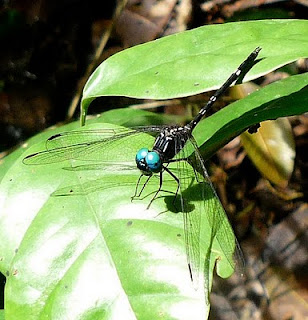 One male Flame-tailed Pondhawk (Erythemis peruviana) was near the parking lot: 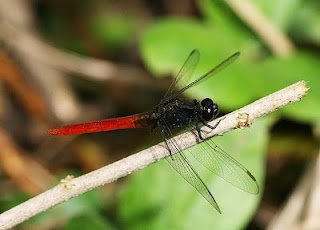 Pipeline Road is a must if one visits the area. There are many opportunities to explore many river crossings. Sadly, it rained on us almost the entire time of our visits to this great location. Here's one instant without rain at Rio Frijoles: 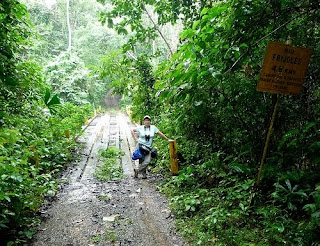 The insect highlights of the trip were found at The Canopy Tower. During the last two nights of our stay, the staff put up a white sheet with a black light to attract moths. This attracted dozens of species, along with other interesting insects. We haven't identified most of the moths, but they can be viewed in the latter half of the Flickr set here or this Flickr set here. I didn't add moth photos here since I can't decide which are the coolest, but here are a couple of non-leps: 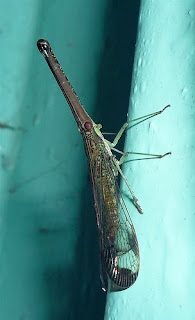 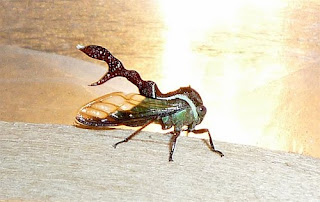 The rains continued after we left and truly caused problems:
- The Panama Canal was closed for one day.
- A portion of the Centennial Bridge washed out.
- Here's an incredible video showing the level of water and the force of the rains. This is the bridge one uses to access Gamboa and the Pipeline Road Area from Panama City.

Hopefully your future travels avoid rains such as this. 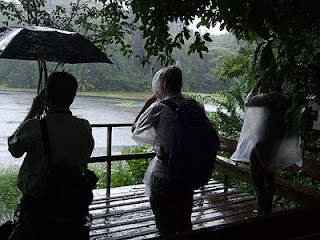 Posted by Darrin OBrien 4 comments
Email ThisBlogThis!Share to TwitterShare to FacebookShare to Pinterest

Got bugs? Get Pentax Papilio binoculars 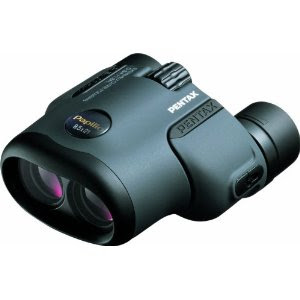 The fundamental tools-of-the-trade for a field ecologist are pretty basic: good boots, "Rite-in-the-Rain" notebooks, and binoculars. For a long time, I only had two pairs of binoculars: my good Leica bins and a cheaper pair I wear bird banding (a lesson I learned when I had to send my Leicas in for professional cleaning when errant bird poop finally froze up the eye pieces). Soon I felt the need for a little travel pair to keep in the car.

Then, middle age rudely diminished the close-focus range of any binocular I owned. As I started doing more grant work involving insects, especially dragonflies, I found that I needed not only a good insect net, but bins with really good close focus. Late this summer, I picked up a pair of Pentax Papilio 8.5x21 binoculars.

They* rock! Advertised close focus is 18 inches, easily obtainable. I thought that sometimes I could get even closer. This is achieved through some sort of optics magic. The blurb at the Pentax web site explains it is via "new design technology that automatically compensates for the misalignment of right and left image fields at close ranges." I read that the close focus amounts to holding something ten inches from your face and looking at it with a 5x hand lens. Since I do a lot of insect surveys, this is extremely worthwhile. The image is bright and clear. When I took a look at my first fly in the yard, it reminded me of when I first got glasses as a kid -- a kind of "wow" experience.

Whereas good high-end birding binoculars only take a half turn of the focus knob to go from at-your-feet to in-the-next-county, the Papilios offer sharp focus at close range through many swipes of the knob. Switching back and forth between my birding bins and the Papilios is a little challenging because they are so different. The Paps are adequate for casual birding, but the need to paw at the focus means a bird flying by you as you are examining a Monarch will likely go unidentified. It just takes too long to get on a moving object and focus.

The Papilios are very lightweight (10.2 oz) and small (less than 5 x 5 inches). I typically kept them tucked in the front pocket of my camera bag when I was doing serious field trips, but often had them around my neck in the yard, where they were easily forgotten. The strap attachment is the most hassle-free I have encountered in neck-dangling optics: a post-in-groove locking arrangement. It's not only quick and secure, but allows very free swiveling movement. While it eliminated the tedious process of having to thread a strap through a little potentially-fragile loop on the bin body, it also prevents replacement of the rather standard webbed nylon strap with anything else but another strap with the same attachment. However, at this light weight, a padded strap isn't necessary.

The bins have a rubberized coating, but are not waterproof or fogproof. I did have them on our rainy Panama trip, and had no problems, although admittedly there were not a lot of insects out in the rain to look at.

Other features include fully multi-coated lenses, 15 mm eye relief, and a threaded hole on the bottom for tripod attachment.

I'm really pleased with these binoculars (this binocular!), especially at their very reasonable price. I'd recommend them to anybody who likes to look at insects, if you need a spare pair of travel bins, or even for casual or beginning birders, who often start out looking at close-by birds anyway.

*A pair of binoculars is really an "it." This sounds weird to me. I'm going to try to let my hair down here.
Posted by JAC 0 comments
Email ThisBlogThis!Share to TwitterShare to FacebookShare to Pinterest
Newer Posts Older Posts Home
Subscribe to: Posts (Atom)
Give the Gift of Amazon Prime