In a previous post, I mentioned the three major rivers in Wayne Co., and the degraded nature of the Rouge River. By one recent estimate*, over 90% of the Rouge is ecologically impaired. So it was exciting to find two woodland stream specialists in the watershed recently.

Streams running through woods, at least accessible ones, aren't terribly easy to find anywhere in the county. I spend a lot of quality time with Google Earth looking for decent ones. The best is the little no-name creek that flows into the Huron at Lower Huron Metropark, the only location where we've found Arrowhead Spiketail (Cordulegaster obliqua). A few weeks ago, I was scouring the new updated images on Google Earth, and came across a little creek that I had written off in the past, flowing through the northwestern corner of Maybury State Park, itself in the extreme northwestern part of the county. I later found out it has the unflattering name "Sump Drain" and it's a tributary of Johnson Creek, discussed in the previous post. Stylurus and I decided to check it out. 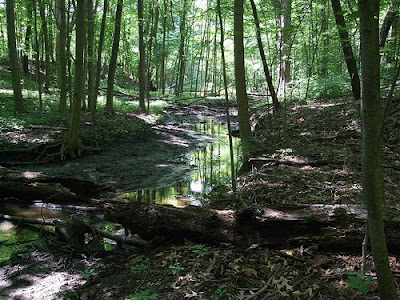 It was quite easy to get to, and when we reached a point where it crossed under the trail, Stylurus went in on a deer trail for a closer look. Immediately he saw a spiketail, and moment later an emerald! This was astounding and I rushed to join him (brushing against plenty of wood nettle in the process). We both saw each species cruising the stretch we were standing by, but it was twisty and overgrown. We went across the trail to the other side, where it was much more open, with less undergrown. The little creek was still sinuous, and had deadfall over it in places, but it was easier to get around. Every few minutes, a spiketail or emerald would pass by on patrol. Despite being half-blind in one eye due to an infection, Stylurus was the one who caught a male of each species: Arrowhead Spiketail and Mocha Emerald (Somatochlora linearis, the only species of this genus we've had in the county). Stylurus was happy to point out I won the prize for "most missed swings in one day." 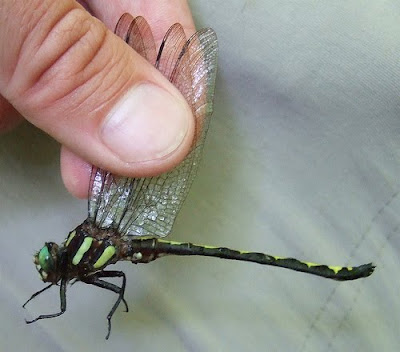 Arrowhead Spiketail. We were surprised to see
so many, as it is getting late in the season for them. 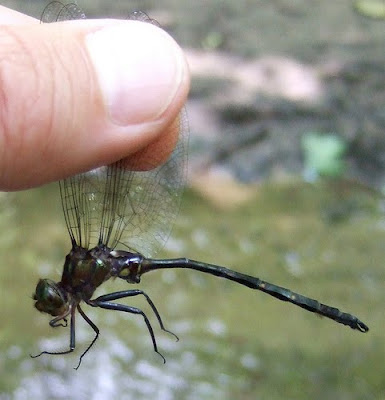 We returned with Mark O'Brien the next weekend. When we get together with Mark, it involves a lot of just standing around and jawing. And as much as I love urban dragon hunting, having a chance to get out in the field with Mark is even better, if a little less productive! 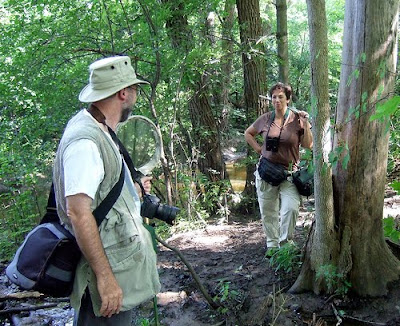 We saw no spiketails. Apparently the bunch we had the previous weekend were the last of the season. There were quite a few emeralds, however, and Mark was determined to land one to have a look. 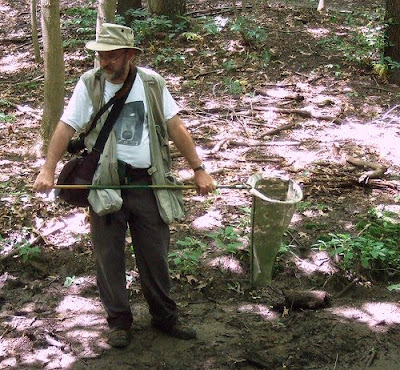 We also saw one Fawn Darner (Boyeria vinosa), as their season is just beginning. The deadfall became more dense as we walked south, so we didn't go too much farther than we had the first week. The good water quality was indicated by the presence of Mottled Sculpin (Cottus bairdii), a fish of well-oxygenated water.

Then we wandered out to a clearing, where we saw several darners flying around. We caught a couple, and got very close to some others. Far as we could tell, they were all Lance-tipped Darners (Aeshna constricta), one of the most common species around here. 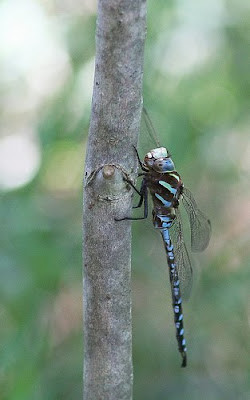 We'll be visiting this location again to see if any other darners show up, and to explore a couple of nearby ponds.