It wasn't found today, but the name fits the day. 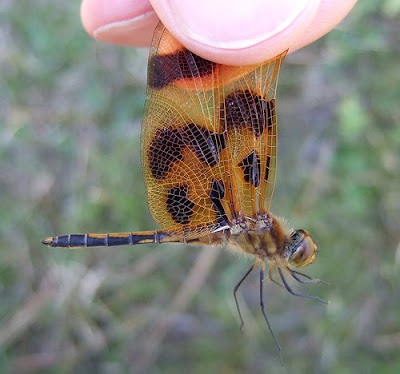 Smoky On The Water

In 2008, I found a female Smoky Rubyspot (Hetaerina titia) at Humbug Marsh. That was a new species for Wayne County, Michigan, and we had wondered where a population occurred in the area. Then, on September 18, 2009, Burt Cebulski posted to the Great Lakes Odonata listserv that many individuals had been found along the Raisin River. Thus, I decided to check locations in Monroe and Wayne Counties on September 19th along the Huron River.

First stop was the park along the Huron River at I-75 in Monroe County. This location gives good access to the river upstream from the I-75 bridge. It is essentially a location for fishing, but has debris dumped in the river and litter along the banks and in the bushes (not an attractive location). Within minutes I spotted a dark, male rubyspot (Hetaerina species) perched on the rim of a half-submerged barrel. Unfortunately, it was too far from shore to net. Checking other possible perches turned up additional individuals perching on a downed tree over the water. The near shore area was shaded, so I shimmied out on the trunk to get closer and with some patience, I netted a couple of male Smoky Rubyspots (H. titia).
Here's a photo of one while looking at the downed tree: 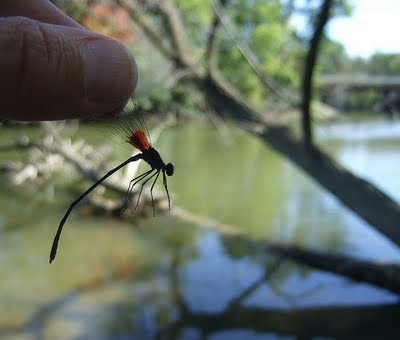 Here's a photo looking upstream. That is Wayne County at the far shore. I was able to observe this species on both sides of the river: 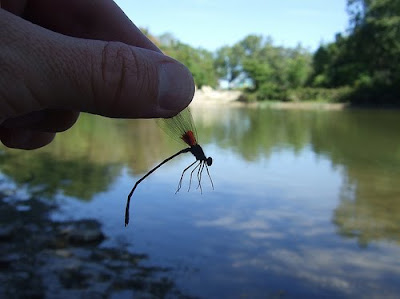 ...and a close-up showing the overall darkness of the species: 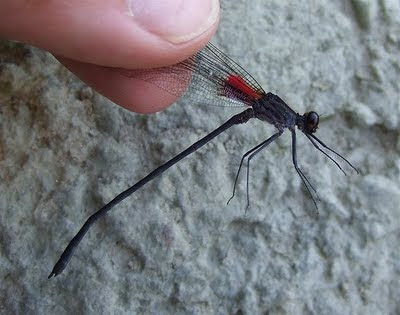 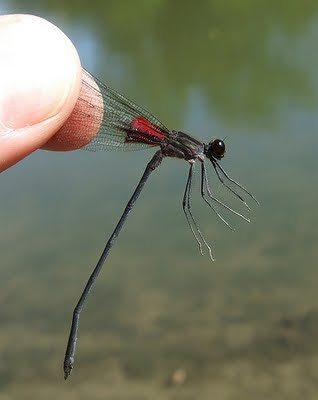 Unfortunately, I wasn't able to capture any females for examination. In total, there were 6+ males and 2+ females of H. titia. I did not find any American Rubyspots (H. americana) at this location.

I tried another spot downstream of the I-75 bridge on the Wayne County side of the river. This was only a few hundred meters from the first location, but was sunnier. Here I found only American Rubyspots (H. americana). Following are photos of a male H. americana for comparison: 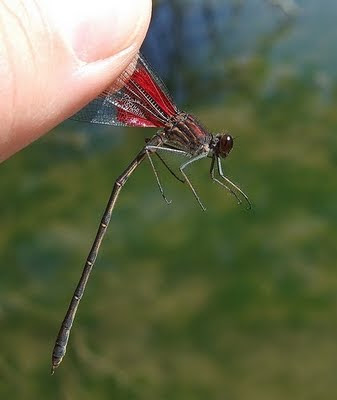 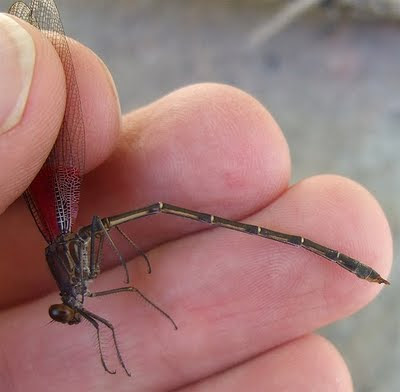 After this successful location, I headed much farther upstream to Lower Huron Metropark in Wayne County. However, I had no luck finding rubyspots.

Next year, I'll have to check additional locations along the Detroit River for H. titia in mid-September.
Posted by Darrin OBrien 0 comments
Email ThisBlogThis!Share to TwitterShare to FacebookShare to Pinterest

Lance-tipped Darners (Aeshna constricta) are one of the most common Aeshnids in southeast Michigan. While visiting Lake Erie Metropark in Wayne County on September 7th, I happened upon this coupled pair which were most cooperative. 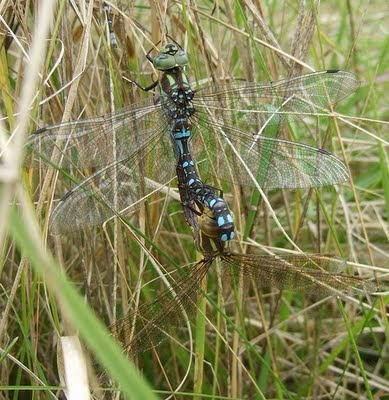 The female is of the yellow-striped form. Also, note the differences between the thoracic stripes of the left and right sides of the female. 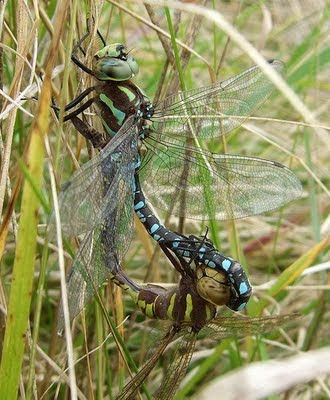 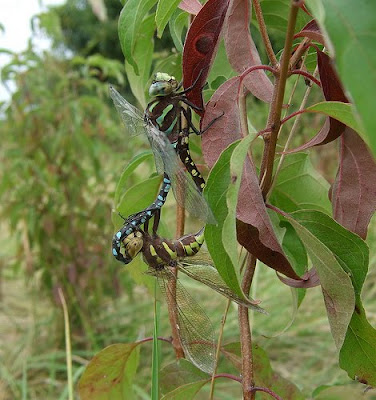 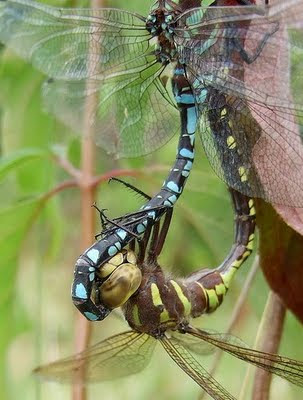 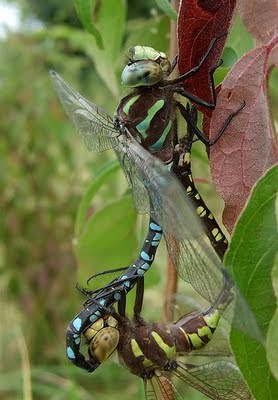 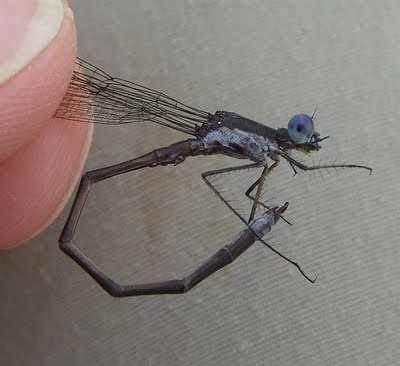 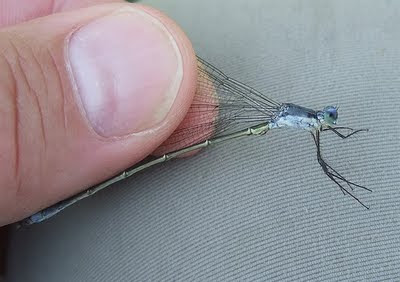 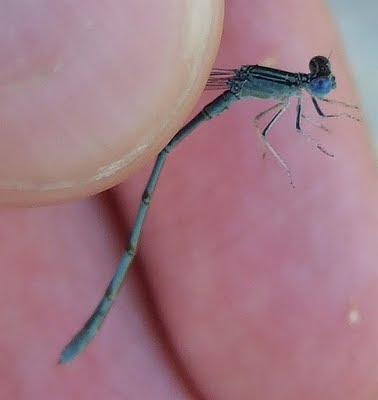 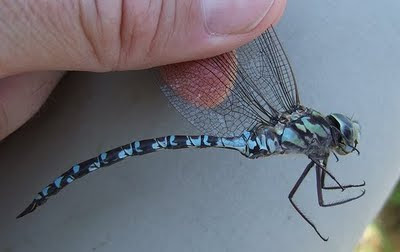 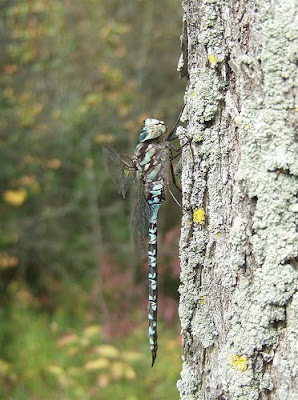 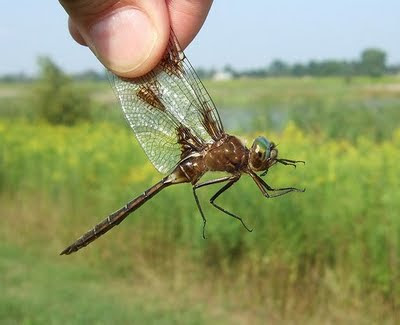 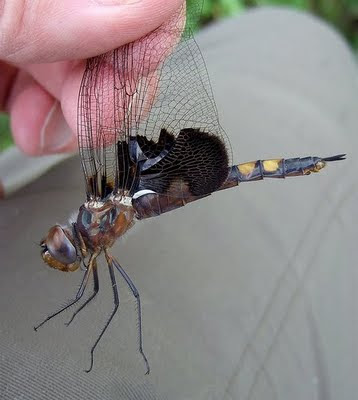 I didn't spend enough time checking the stream (Coon Creek) due to the masses of mosquitoes, but there have to be species to be found along the waterway. Also, the constructed ponds and lakes have a good number of sandy edges. I'll have to check out this location earlier in the 2010 season in hopes of finding clubtails (Gomphids).
Posted by Darrin OBrien 0 comments
Email ThisBlogThis!Share to TwitterShare to FacebookShare to Pinterest
Newer Posts Older Posts Home
Subscribe to: Posts (Atom)
Give the Gift of Amazon Prime