I found something cool when Stylurus and I were doing our weekly Odonata census at the Detroit River International Wildlife Refuge Humbug Marsh Unit. Although the final report will only classify relative abundance of each species into one of five simple classes, I have tried to actually count all the individuals we encounter on our transects and plots. This isn't too hard for most dragonflies, but quickly becomes tedious for damselflies. Obviously, it isn't possible or necessary to count every single one, but I tally what I see as I walk slowly along, and have to net a lot of bluets and forktails to make sure I'm getting the right ratio of similar species.

The other day a slightly odd forktail caught my eye. It resembled a male Eastern Forktail (Ischnura verticalis) with a bright green thorax and mostly black abdomen, but the tip of the abdomen had a very reduced blue pattern different from any species of forktail that I could recall. Netting it, I was surprised to see it was a female. I put it in an envelope to examine later.

At home I gave it a close look. It had a vulvar spine [1] and what I could "read" of the prothorax and mesostigmal plates [2] under my microscope indicated it was an Eastern Forktail. However,we'd never seen an illustration of one so strongly male-like and the bright blue pattern on the dorsal abdomen tip was unlike any we'd seen -- on any forktail.

Many species of damselfly have a female morph that is colored like a male. They are not only the minority morph in populations, but also very rarely seen. First, once they get older and more pruinose, they look just like typical females. And of course, not too many people look at enough inch-long insanely abundant insects in the grass to pick them out.

I solicited comments on my photos. Both Nick Donnelly and Dennis Paulson confirmed that this was a rare andromorphic female Eastern Forktail (Dennis has seen only one in his long career). In fact, the incidence of andromorphs in this species is under 1%. Here are the photos; all are clickable for larger sizes. More background follows. 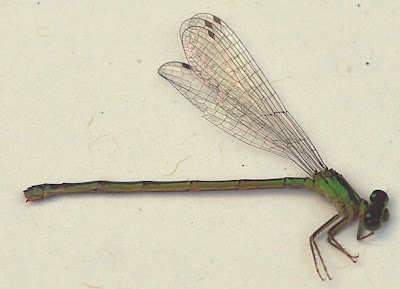 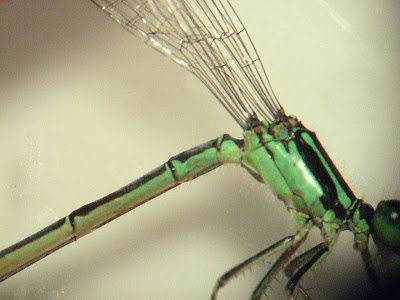 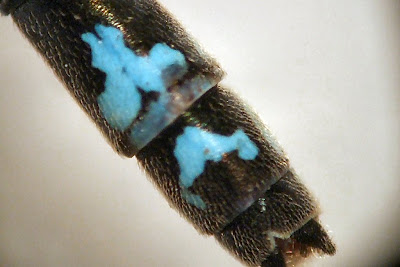 It has been proposed that male-like morphs in female Odonata serve to protect females from being harassed by males. This theory was supported by the fact that female polymorphism occurs more often in species where males search for mates, versus families in which males are territorial (whereby females can avoid harassment by avoidance). The situation is actually somewhat more complicated than that -- beyond the scope of this post. A paper reviewing female andromorphs, various explanations, and evolutionary history is listed and linked to below. It cites a study (done in Michigan, coincidentally) giving the frequency of andromorphs in Eastern Forktails as 2% of 553 individuals and 0 out of 386 others. My specimen will be housed at the University of Michigan's Museum of Zoology Insect Collection.

As an aside, Russet-tipped Clubtails (Stylurus plagiatus) are increasing in number at the same site. A few very teneral individuals were found, along with a number of older ones, and a pair in tandem. Here's a cooperative male: 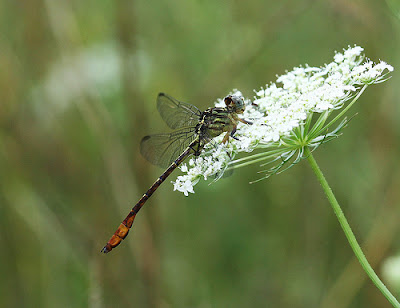 [1] Vulvar spine = point on the underside of the 8th abdominal segment in some damselflies; Eastern Forktails have one, Fragile Forktails (I. posita, the other common forktail in my area) do not.

[2] Prothorax and mesostigmal plates = structures behind the head of female Odonata that enable the male claspers to fit and lock on when the pair are in a mating wheel. 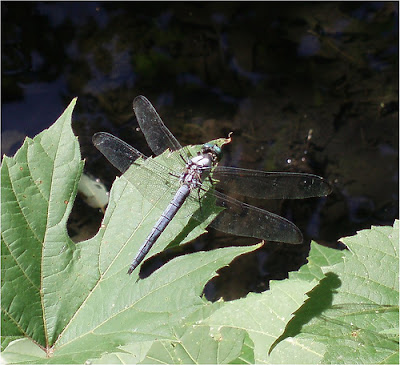 Recap:
This was just an odd and unlikely location, but it clearly floods a lot in spring, and probably stays fairly wet in less-parched summers. It will be worth a few return trips.
Posted by JAC 1 comments
Email ThisBlogThis!Share to TwitterShare to FacebookShare to Pinterest
Newer Posts Older Posts Home
Subscribe to: Posts (Atom)
Give the Gift of Amazon Prime