There is something unsettling about doing field work with the sun obviously autumnal -- low in the sky -- fallen leaves underfoot...and sweating in 86F temperatures and high humidity. In spite of the the fact that the calendar page flipped days ago to October, we couldn't pass up heading out to do one last survey at the Detroit River International Wildlife Refuge Humbug Marsh Unit. The USFWS will certainly be getting its money's worth out of this grant.

Last year, we were on the lookout for some rare vagrants that had showed up in Ohio. One of them was Band-winged Dragonlet (Erythrodiplax umbrata), a species most common in the U.S. in Texas and south Florida. Here's the distribution dot map from Donnelly's project [1].

This thought was in our minds as we entered the Refuge. The front third of the large brownfield portion is undergoing restoration, and had been scraped clean in the spring. Now, it is mostly uneven sandy soil with sparse weedy vegetation. It rained several days ago, and there were perhaps a half dozen depressions with a few inches of water in them. 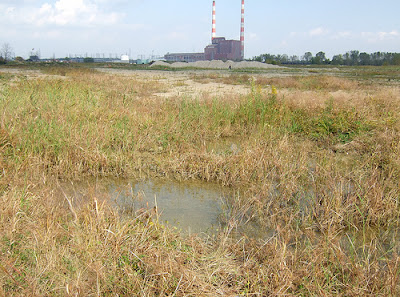 Stylurus was ahead of me, and passed by the first glorified puddle. As I approached it, I saw a patrolling dragonfly that had black on its wings. I automatically called out "Twelve-spotted Skimmer," as this would be a late fall date for that species. Almost as soon as I said it, I noticed this ode was smaller than a skimmer, had a dark blue body, and not enough "spots." Stylurus was heading back my way. "This could be a dragonlet!" I called out. He got closer and took a look, and agreed. North America's northernmost record of this species!

This wet spot was only a few yards square, but the dragonlet rarely landed. It seemed reluctant to leave, but flew around busily. It perched briefly several times, but would take to the air as soon as we moved. Both of us managed to fire off a few photos -- Stylurus with a point-and-shoot, and me with my good camera, but a macro lens. 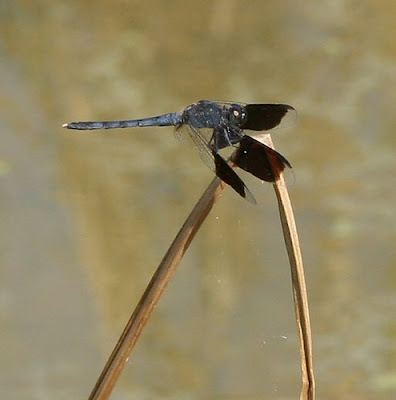 Suddenly, another male dragonlet flew to the puddle. They circled each other, and flew to the treetops. It was only moments before one returned. Not wanting to chase it off for good, we quickly explored the other nearby puddles. There was a dragonlet at the closest one. Perhaps 15 minutes passed without us being able to get a good swing at either one. With Stylurus near one puddle, I went back to the first. Both dragonlets appeared, and while they were preoccupied with each other, I was able to scoop both of them up. The first and second Michigan records in one net swing.

We found very little the rest of the day. Some Familiar and Tule bluets, Common Green Darners, Wandering Gliders, a couple of Black Saddlebags, some Eastern Forktails, and a handful of Aeshnas, probably Shadow Darners. Band-winged Dragonlet was the 35th species we have recorded at the Refuge under our survey grant this year. It also represents the fifth state record for the Urban Dragon Hunters, and something like the 45th county record, bringing the Wayne County total to 94 species. It was a fine way to end the field season.

But stay tuned. I'll try to do an annual summary, and we will be doing some traveling in the tropics long before the 2008 Michigan season begins again. More to come!