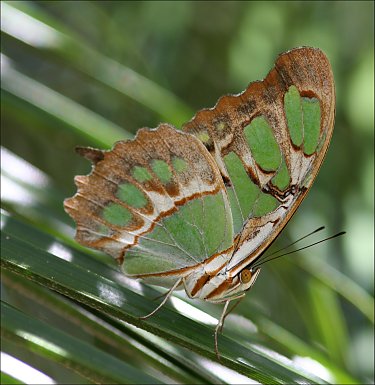 The Malachite (Siproeta stelenes) is a classic butterfly of the tropics, found from south Florida and south Texas through Brazil. With a 9 cm wingspan, and brilliant green coloration, it's hard to miss. The upperside is kelly green and black, in a pattern reminiscent of a swallowtail. I kind of prefer the more subtle patterning on the underside of the wings.

Adults feed mostly on rotting fruit, sometimes nectar and dung, and are found along forest edges and openings, including disturbed areas. Among the larval host plants is ruellia and shrimp plant (Blechum brownei). The latter, a non-native ornamental considered an invasive weed, has probably helped this butterfly spread in the southern U.S., or at least Florida, after the insect arrived, presumably from Cuba, sometime in the 1960s. La Belen Preserve, Najasa, Camaguey Province, Cuba. 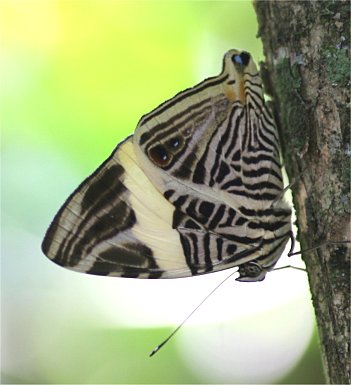 Colobura dirce, sometimes called The Mosiac, is seen here in its characteristic head-down pose, which it strikes after an erratic pell-mell flight through shady forests throughout the Greater Antilles and Mexico south to Argentina. Larva feed on Cecropia, a familiar tropical pioneer tree species. Colobura is much cooler looking in this posture; the uppersides of the wings are plain brown with a cream-colored stripe. Rio Hatiguanico, Zapata Swamp, Matanzas Province, Cuba.

The Mercurial Skipper (Proteides mercurius) is a large skipper with a gorgeous subtle pattern on the underwings, and a glowing orange head and body. It would seem to be hard to miss, but is reported to be secretive. It can be found in the southern U.S. and the Greater Antilles. This particular subspecies, P. m. sanantonio, is endemic to Cuba. Palpite, Matanzas Province, Cuba. 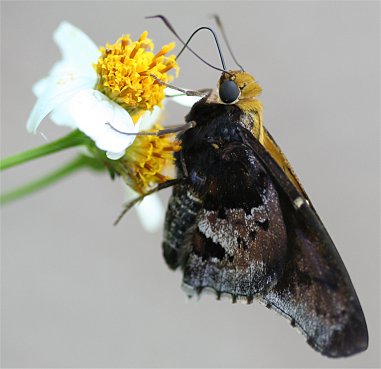 The Pale Cracker (Hamadryas amphichloe) is in a family named so because the wings can make an audible "clicking" sound. This species, found from Mexico to Peru and on the larger West Indian islands, may be silent. Sierra Cubitas mountains, Camaguey Province, Cuba. 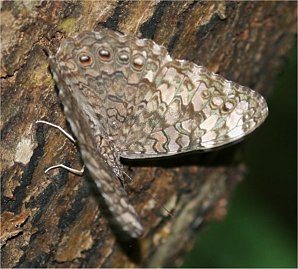