I took a partial vacation day to revisit Island Lake SRA on June 13, 2011 in hopes of confirming a new species or two for Livingston County. It was a windy and partly cloudy afternoon, but the area around Spring Mill Pond has the large sand dunes which provide areas of shelter. 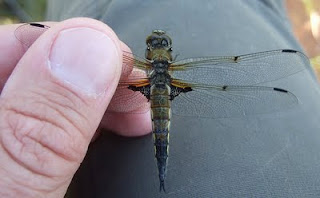 More than 90% of the bluets I examined were Marsh Bluets (Enallagma ebrium), such as this male: 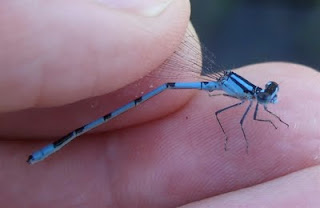 If you click on the photo, the forked cerci are visible which is a diagnostic field mark for this species.

At one of the "stream" crossings, a male Unicorn Clubtail (Arigomphus villosipes) was found perching on the gravelly edges: 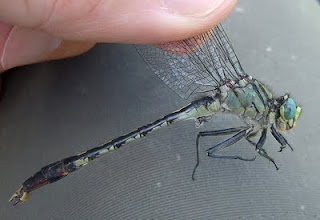 Finally making it to the vicinity of the saddlebags (Tramea sp.) sightings from a couple weeks earlier, I had little hope of finding much since it was quite breezy. Given the large amount of rain in recent times, the location southwest of the parking area was flooded. This helped make the hunt for odes a bit easier since they seemed to be gathered near the little "islands" of vegetation. Within minutes, a male Carolina Saddlebags (T. carolina) flew by and went with the wind. I thought that may be my only sighting, but it ended up circling back to one of the little islands and perched on a small snag. Soon after another male Carolina Saddlebags perched on an adjacent plant. Here is the confirmation of this species for the county, which shows the purplish frons and the black coming down the sides of S8 and S9: 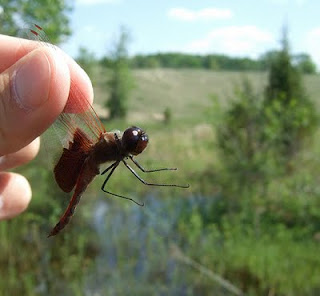 I then followed the flow of water to a little pond which had a patrolling Prince Baskettail (Epitheca princeps). Nearby, perched on a branch over the water was a male Lancet Clubtail (Gomphus exilis): 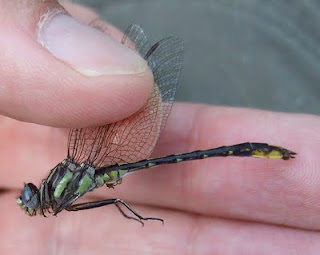 A second Lancet Clubtail was found a few meters down the shoreline. 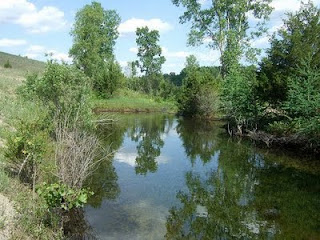 Finishing up the visit, I had decided to check the shoreline of Spring Mill Pond itself. Before arriving at the edge, a Springtime Darner (Basiaeschna janata) flew past and landed in vegetation on the hillside. As I approached, it lifted off and flew away, not giving a chance for a photo or further observation. Returning to the pond, I found another patrolling darner so I positioned myself between cattails and came up with this male Springtime Darner (B. janata): 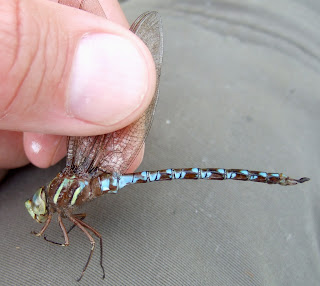 What a way to end a day!

Given the diversity of this area, I have to wonder what other species will be found in the coming visits.
Posted by Darrin OBrien 1 comments
Email ThisBlogThis!Share to TwitterShare to FacebookShare to Pinterest

Looking to fill in gaps of the Wayne County, Michigan, odonata list, I had decided to visit Crosswinds Marsh, phase I, on June 11, 2011.

There is a nice loop (Blue Heron Trail) that hits a variety of habitats that I was visiting last fall and I was hoping for a missing early season darner or a Spangled Skimmer. No luck for either, but one does have to get into the field to have a chance.

Surprisingly, there were a large number of Aurora Damselflies (Chromagrion conditum), a species we do not see often. Many were coupled: 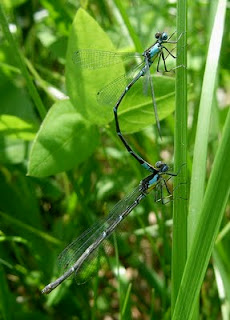 Here's a closeup of a male showing the yellow area of the thorax: 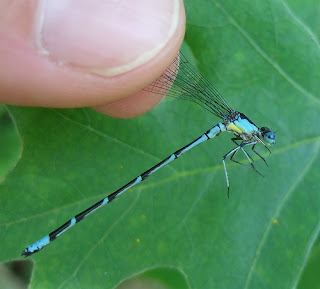 Hanging out on a culvert for Disbrow Drain was this male Unicorn Clubtail (Arigomphus villosipes): 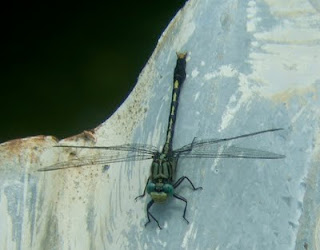 I find this species very difficult to catch, unless one lands directly in front of the net. Thus, the digiscoped image through my binoculars is the best I can provide.

Pleased with the population of Aurora Damselflies discovered, I was hiking back towards the car and paused at the Mallard Trail boardwalk. A smallish, dark ode flew by that had brilliant, green eyes. Initial thought was baskettail (Epitheca sp.), but the body was looking solidly black and the eyes were like emeralds. Eureka!

I called Julie to tell her of the interesting sighting, and she also asked if it was a baskettail. Just then, the dragonfly flew back near me. Ending the call quickly, I was able to swing the net and capture the individual. It was a male emerald (Family Corduliidae), but I have little experience with any species other than Mocha (Somatochlora linearis). We just don't have bog or fen habitats in our home county. 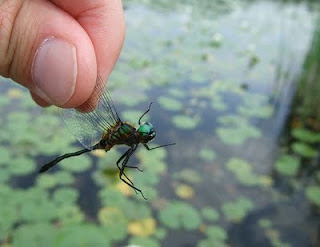 Identification would have to wait until I returned home and we reviewed our references.
Examining the wing venation and the claspers confirmed the species as Racket-tailed Emerald (Dorocordulia libera). This is the first confirmed record of this species for the county! 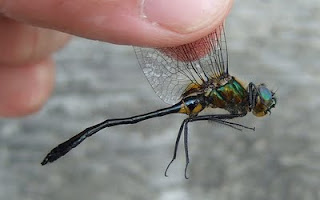 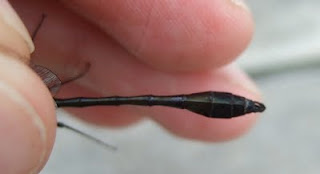 Interestingly, Julie thought she had seen an emerald in the same area ~10 years ago, but dismissed it as a baskettail. There was a literature record from the 1870s, but this was to be removed from the county list since there is not voucher available and the records from that time period can be quite confusing. Sometimes locations of "Detroit" in the historical records seem to be related to the ship's port of call (typical transportation in that era), rather than the actual sighting or voucher location.

Anxious for Julie to see a live individual, we returned on June 19. A half hour or more was spent in the area of the original sighting with no luck. (Although, I thought I had an individual fly by at one point.) We slowly worked our way to the western boardwalk, while I tried to flush odes from the adjacent vegetation. We did see our first Halloween Pennants (Celithemis eponina) and Eastern Amberwing (Perithemis tenera) of the year. I pushed farther into the vegetation and flushed a couple female Slaty Skimmers (Libellula incesta), when a coupled pair of smaller, dark dragonflies flew in and perched in front of me. Racket-tailed Emeralds! Julie came over quickly with her good camera and was able to observe and photograph these cooperative individuals. 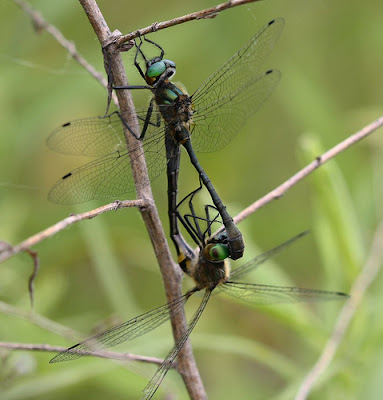 Mission accomplished and we have confirmation these are breeding in the vicinity. Julie once again has to revise her manuscript on Wayne County species, which she is hoping to submit for publication in the next couple of months.
Posted by Darrin OBrien 2 comments
Email ThisBlogThis!Share to TwitterShare to FacebookShare to Pinterest 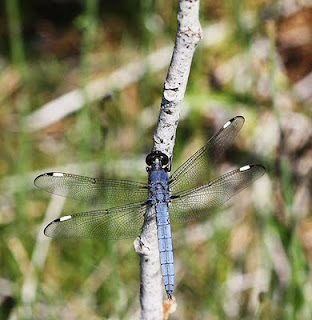 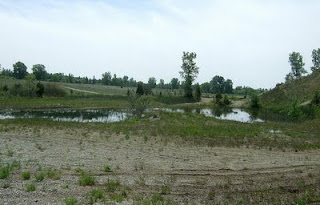 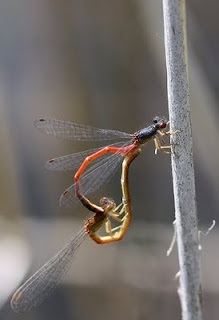 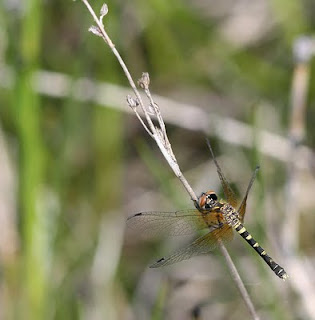 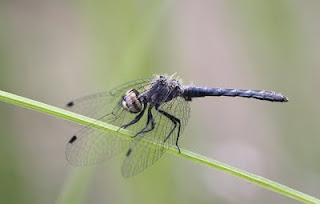 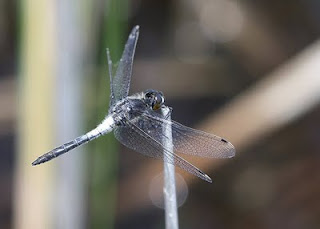 This outing provided a nice variety of dragonflies, some of which we don't see regularly in our home county due to the lack of bog or acidic habitat. Followup visits will be necessary to find additional species.
Posted by Darrin OBrien 2 comments
Email ThisBlogThis!Share to TwitterShare to FacebookShare to Pinterest

As noted previously, I wanted to find Arrowhead Spiketail (Cordulegaster obliqua) in a county other than Wayne.

On June 4th, I made a visit and walked the southern edge of the woods near the creek. Within 30 minutes I spied an individual perched at waist height, but it flushed before I approached. Another 10 minutes later, a female flew down the path and perched in front of me at chest height. A new county record confirmed! 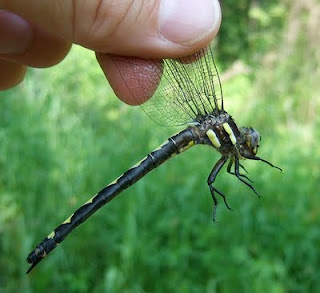 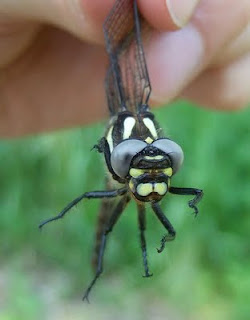 Next up....which species will we find in another county?
Posted by Darrin OBrien 0 comments
Email ThisBlogThis!Share to TwitterShare to FacebookShare to Pinterest
Newer Posts Older Posts Home
Subscribe to: Posts (Atom)
Give the Gift of Amazon Prime