We saw our first Green-striped Darner (Aeshna verticalis) in October of 2003 at the hawkwatch (formerly SMRR, now the Detroit River Hawkwatch) at Lake Erie Metropark.

Years have gone by without seeing others and now, in the past week, we have found multiple individuals at two more locations in Wayne County.

On August 28th, we visited Crosswinds Marsh in an attempt to confirm Canada Darner (A. canadensis). At one point in the NW area of phase I, a mosaic darner flew across the trail and perched in a small tree. This turned out to be a female Green-striped Darner (A. verticalis). This shot shows the obtuse angle of the anterior lateral thoracic stripe: 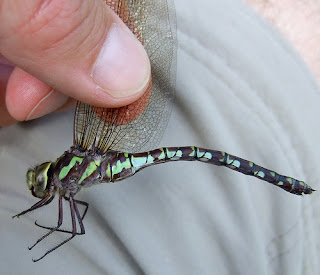 This shot shows the dorsal patterning: 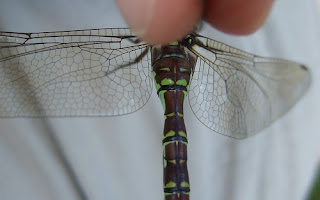 This shot shows the frons and the face: 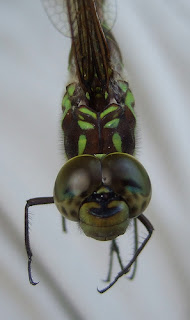 Several days later on September 3rd we visited Maybury State Park. In the northwest area of the park, we found several darners working an open area. We captured a pair of Green-striped Darners (A. verticalis).

Side view of the male: 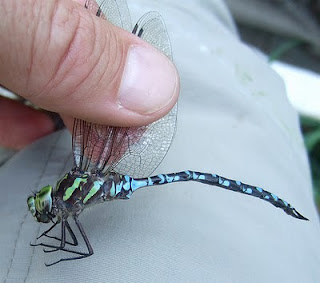 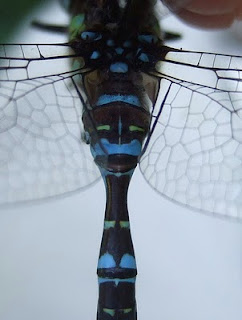 Another good feature for confirming ID of A. verticalis is the lack of "teeth" on the dorsal surface of the cerci. I'm not sure one could see "teeth", or bumps, in this photo even if it was a Canada (A. canadensis), but in the hand and under a microscope the "teeth" were absent: 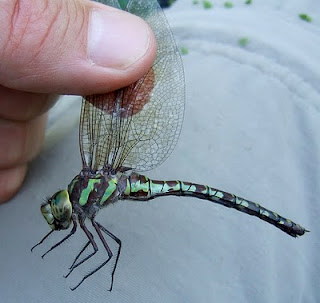 It has been fun gaining more experience with the Green-striped Darners (A. verticalis), but we still need to find that elusive Canada Darner (A. canadensis) in Wayne County. In the coming days, we'll add more information about how to differentiate A. verticalis from A. canadensis.
Posted by Darrin OBrien 0 comments
Email ThisBlogThis!Share to TwitterShare to FacebookShare to Pinterest

At the risk of sounding like (even more of a) stick-in-the-mud regarding the value of vouchers, here is a great example of not always being able to trust photographic identifications of insects: 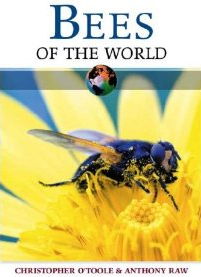 This is a real book, thankfully out of print, which has a fly illustrating the cover. It was highlighted on the Scientific American blog of Alex Wild in a post on misidentified insects in the media.  Alex has his own excellent blog, Myrmecos, where he has shown that even National Geographic isn't immune to these mistakes (nor The Learning Channel, a Discovery company). Surely they should know better. And so should the "experts" at pest eradication companies around the country, but look at the array of things that are not fire ants displayed on their web sites.

Unfortunately, mislabeled photos online often come back to haunt us, as the misidentifications may be passed on and perpetuated. I'm not going to beat a dead horse here. I'll just say be careful when using photos to ID insects, don't just label something online if you aren't sure (ask for help!), and correct your mistakes in a timely manner.

[stands down from soapbox]
Posted by JAC 3 comments
Email ThisBlogThis!Share to TwitterShare to FacebookShare to Pinterest

We had heard that Flag-tailed Spinylegs (Dromogomphus spoliatus) were observed at Indian Crossing Trails Park in Tecumseh in the mid-August. This is only the third location they've been observed in Michigan so we had to confirm the record. The first record was from Oakwoods Metropark in Wayne County and earlier this August a photograph was obtained of an individual at Pte. Mouillee SGA in Monroe County.

We arrived to the park late in the morning on August 27, 2011 and almost immediately flushed a spinyleg from the rip rap bordering the millpond next to the community center. We obtained several photographs at a distance, but they were very skittish.
Some through binoculars: 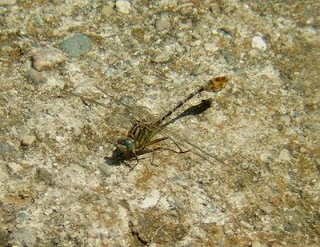 and others with Julie's macro lens: 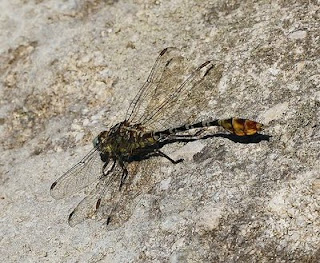 Now the challenge was to net one. We worked the edge of the dam repeatedly, trying to get in a position to approach the individuals without casting a shadow and having room for a swing of the net. After 45 minutes or so, I was able to trap one on a flat piece of concrete with Julie helping to herd it. This male (D. spoliatus) confirms the record for Lenawee county and was one of ~10 individuals present: 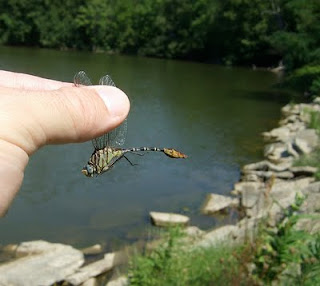 ...and this photo shows its spiny legs and the flag tail: 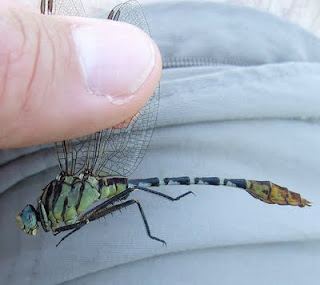 While chasing the target species, we found several other great dragonflies. A couple Black-shouldered Spinyleg (Dromogomphus spinosus), such as this male: 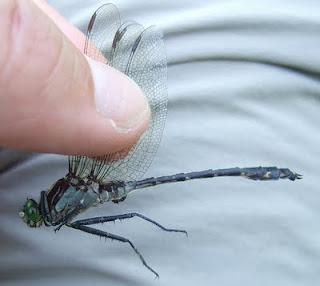 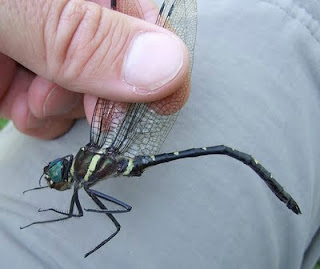 Many Smoky Rubyspots (Hetaerina titia), which seem to be everywhere this year: 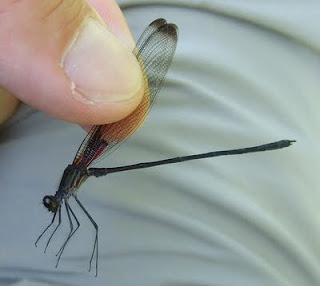 A few Eastern Amberwings (Perithemis tenera), such as this female: 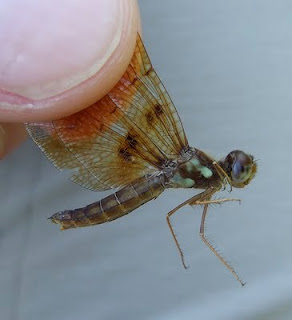 We also had heard that a Dragonhunter (Hagenius brevistylus) or two had been observed recently, but no luck this day. We had observed a male a few years ago, but couldn't obtain any photos. Indian Crossing Trails Park is a must for a return visit in the future.
Posted by Darrin OBrien 4 comments
Email ThisBlogThis!Share to TwitterShare to FacebookShare to Pinterest

Last night there was a strong movement of dragonflies over our house outside of Detroit last night, 1 September. We count migrating Common Nighthawks every evening at dusk, so I was ready with a tally sheet and hand-counter to record the numbers (Darrin was at a meeting, so I was on my own). I may have missed the first part of it, since I went out at the usual time of 0730 PM EDT and stuff was already on the move.

I counted 612 dragonflies -- from what I could tell predominantly green darners, with about 10% saddlebags -- moving south in about 30 minutes. These were mostly what I counted with my naked eye. When I did look up with binoculars, many dozens more visible (as were clouds of flying ants and some other insects that I initially took as wispy clouds!). I estimate that up to 3000 dragonflies passed over the small patch of sky over our yard in a half-hour. Given my inland, urban location, I presume this may have been the fringe of a larger swarm, perhaps along the Rouge River just west of us; much of the ode activity was in the western quadrant of the sky. Large movements often follow a cold front, and/or occur on northwest winds. However, conditions here were a clear/hazy sky, 82F, wind ESE 3, and 69% humidity. The day before was similar, and today is forecast to be the same. I expect the ant/insect swarms played a role.

Animal migrations capture the imagination like few other events the natural world. In 2006, I wrote a brief post about dragonfly migration, and promised a follow-up. I just had to be inspired to finally do it. Last night's observation did the trick. Here is some background and information on dragonfly migration.

Based on observations of mass movements, over a dozen species of North American dragonflies are thought to undergo regular migrations. Two are Aeshnids:
and the rest are Libellulids:
Another dozen species, also in these families, have been reported as migratory.

Strictly speaking, migration is the seasonal movement of an entire population of animals to a more favorable environment. This doesn’t really seem to be the case with dragonflies. Most of the listed species are usually seen as southbound migrants, and their northbound flights are not as well documented. On the other hand, two species -- the Bar-winged and Great Blue Skimmers -- have not been seen going south in numbers. They may not be true migrants, but move north in response to climatic conditions, such as drought, in order to find suitable places to lay eggs (see the previous post on Striped Saddlebags). Variegated Meadowhawks both apparently migrate along the west coast of the U.S., and move east as vagrants. Meanwhile, Wandering Gliders are well-known for tracking swarms of aerial plankton. They are found worldwide, and are quite nomadic. They are also known to make regular, stunning movements between Africa and India (they are referred to as "Globe Skimmers" in that article).

In North America, green darners are the best-studied migratory odonata, and even they do not make a true, round-trip migration. Instead, it is inter-generational, like Monarch butterflies. So-called resident green darners lay their eggs in mid- to late summer. These take nearly a year to emerge as adults, overwintering as larvae. But in the same pond, there may be another sub-population. Eggs laid by early-arriving migrants from the south take only three months to fully develop, emerge as adults in late summer or early fall, and these adults then move south.

We know so little because dragonfly migration is difficult to study. Since it is often low density, we don’t really notice movements until dramatic events take place. Like birds, dragonflies are influenced by weather. For example, in fall, large movements occur during times of northwest winds following the passage of a cold front. These conditions have triggered dragonfly movements where the insects have been estimated at densities comparable to those of locust swarms. Much of what we surmise about dragonfly migration has come from documentation of these types of mass movements.

Tracking more ordinary movements would involve marking the insects somehow. Wings of larger species can be marked or tagged, but for any worthwhile information to be gleaned, large numbers of insects would have to be captured and then recaptured. The use of miniaturized radio transmitters is extremely intriguing, but is costly – not only do you have to pay for the transmitters, but since ground receivers only grab a signal within a mile, finding the outfitted dragonflies requires a plane, where reception increases to five miles or so.

Another less expensive technique currently being used for linking migratory routes and wintering areas in other taxa: stable isotope analysis. Rainwater at different latitudes has different ratios of stable hydrogen isotopes. This isotopic signature is preserved in plants taking up that water, and consequently in the body parts of organisms that were formed as they consumed those plants or other organisms feeding on them. If you know that a particular body part (feathers in birds, for example) is grown at a particular location (usually, the breeding site), you can sample the body part at another location and after a relatively simple lab analysis, “read” the isotopic signature, matching it with a breeding site. This has been done extensively with birds, and also with Monarch butterflies.

Technology is continually improving, and I expect we will unravel many mysteries of dragonfly migration in the near future.

I have dutifully reported my observation to the Xerces Society, and on this web site.

A whole lot has been written about dragonfly migration since my first post, so I'm late to the party. Here are just a few resources: