The most painstaking part of compiling an accurate database for the Michigan Odonata Survey is verifying the correct identification of species that seem rare, in unlikely locations, or collected on unlikely dates. Sometimes these are just errors that occurred when the data was transcribed into the database, but a lot of them have been misidentifications. Access to the specimens in the University of Michigan Museum of Zoology (UMMZ) insect collection has been hampered by the pandemic, as well as the fact that the insect collection has been without a collections manager much of the last 3 years.

One significant finding was made in late 2019, when we became aware of a species that was not included in previous checklists or databases: Dusky Dancer, Argia translata. Two adult specimens were cataloged as being in the UMMZ collection: a female collected by Rodger Mitchell on 25 June 1957, and a male, also collected by Mitchell, from 7 July 1957, both at the University's E.S. George Reserve in Livingston County.

The collection records noted they were "determined" (identified) by Leonora Gloyd. Dolly Gloyd, as she was known, played a central role in the history of Michigan Odonata study. She was associated with the UMMZ for over 60 years -- we will have much more to say about her in the future, but for now you can read a bit about her career in this article. Since she did so much work on damselflies including the genus Argia, we weren't too concerned that the specimens were misidentified. Unfortunately, we could not confirm this, as the specimens were missing at UMMZ. This could be for a number of reasons, the two most likely being that they may have been loaned out and not returned, or they were "misfiled" and ended up in the wrong drawer. The sheer number of specimens at the UMMZ is staggering and it's astonishing how everything is relatively well-organized, especially considering the whole collection was moved from central campus to the present location miles away.

We were now faced with whether or not to include Argia translata on the Michigan checklist without being sure there was physical proof. We made it a mission to find this species. We did so on 10 September 2019, collecting a male on the Huron River at Bandemer Park, Ann Arbor, Washtenaw County. We saw three more just across and down the river at Argo Park canoe launch area, usually perching on a rock just out of net's reach. The following year was lost due to covid, but this year we found them again at Argo, on the same rock, and collected another voucher on 16 August 2021, confirming a population on this stretch of the Huron. A week later, we found them on the Saline River at Wilson Park in Monroe County.

Argia translata has the largest distribution of the 100+ species in this genus, ranging from southern Ontario through to Peru. It the US, it's most common in eastern states, and irregular in the west. Here is the rough estimate of the regional distribution from Odonata Central: 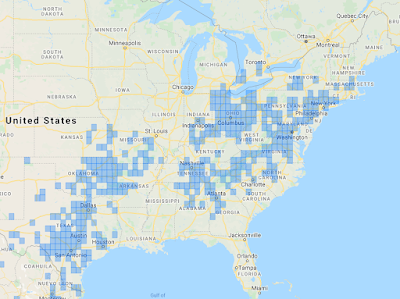 This species is fairly large, mostly blackish-purple, and found in a variety of rivers, streams, ponds, and impoundments, often perching just offshore. The markings can be variable thoughout its range, in particular the amount of pale patterning on s8-10 and some of the thoracic markings on the male. This page has some scans of males.

This is a male from Washtenaw County, and it's pattern and coloration seem typical of those we've found in southeast Michigan. Teneral female Powdered Dancers, Argia moesta, might be mistaken for A. translata and they frequently occur in the same habitats together. An important way to distinguish these species is to look at the forewing pseudostigma and see if there is a crossvein below it -- this is characteristic of A. moesta and is not present in A. translata, as shown below.

Argia translata is the 169th species on the Michigan checklist.

Posted by JAC 1 comments
Email ThisBlogThis!Share to TwitterShare to FacebookShare to Pinterest

There are several different levels or lists of species whose populations warrant some sort of monitoring and/or protections. These include federal and state endangered, threatened ("T&E") and special concern lists; and the species of greatest conservation need generated by the US state-level Wildlife Action Plans. I've served on the Michigan T&E technical committees for birds and for insects since 2014.

More recently, an effort has been underway to compile lists of Regional Species of Greatest Conservation Need (RSGCN) to more accurately reflect species' ranges and harness the management power and shared priorities of multiple organizations across regional landscapes. These lists start with all the species listed on each of the states' Wildlife Action Plans, determine which have populations that are primarily within the Midwest region, and then utilize expert opinion regarding concern levels, threats, and other factors. Two of these lists have been completed: the 15-state Southeast Region and the 13-state Northeast Region.

Over the past year, I participated on two taxa teams (birds and Odonata) for the 13-state Midwest Regional Species of Greatest Conservation Need sponsored by the Midwest Landscape Initiative of the Midwest Association of Fish and Wildlife Agencies (MAFWA). There were just 8 experts on the Odonata taxa team; I represented Michigan along with Dave Cuthrell of the Michigan Natural Features Inventory.

Data on Canadian provinces were considered although as this is a US-based initiative, representatives from Canada were not involved in the committees. There is also some overlap in US states in the various regions, accounted for in the lists.

Nine Michigan dragonfly species are on the list of Midwest RSGCN; 10 species were designated "Watchlist - Assessment Priority" due to there being concern, but insufficient or variable data across the states; and 2 species (Ebony Boghaunter, Williamsonia fletcheri, and Brown Spiketail, Cordulegaster bilineata) are on the Watchlist but "deferred" to other regions that have greater proportions of the population. I have updated the Michigan Odonata Survey website with the Midwest RSGCN species, where you can see all the species that have some sort of conservation or rarity status.

If you'd like a wider view, take a look at the data table which can be viewed here. The table contains all the data on all taxa from all states. There is the ability to sort and filter, similar to spreadsheets like Excel. To just see Michigan's Odonata, go to Filter and choose Where Taxa is Invertebrates: Dragonflies and Damselflies and add the condition Where MI_Occurs is Yes. You'll see many other ways to filter and sort the list. There are a lot of columns, some of which indicate the various criteria used to make determinations.

The project has a website, where you can view highlights and download the full report with appendices. 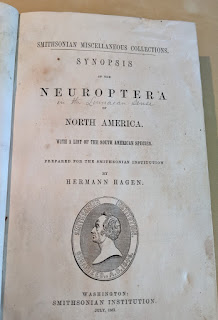 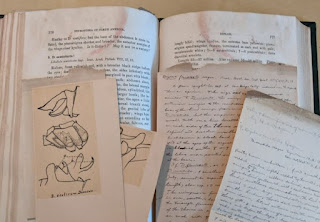 Since we are on the cusp of the dragonfly season here in southern Michigan, a quick note regarding the problem with Epitheca baskettails is timely.
As it turns out, "common" baskettails in southern Michigan (and perhaps beyond, it's unknown until more are collected and examined) are not identifiable from photos, and often not in the hand.
The Common Basketail (Epitheca cynosura) hybridizes with Slender Baskettails (Epitheca costalis, which used to be called Stripe-winged Baskettail), but northern populations show much variability in the amount of brown at the base of the wings, as do E. cynosura in this region. We've collected a lot of baskettails around here, and the majority of them are intermediate forms, as diagnosed by Nick Donnelly from NY who works on several cryptic/hybridizing/new species complexes. This probably indicates that the two species are hybrids and produce fertile offspring and, in turn, backcrosses.
The New Jersey Odes website, though inactive, has a nice comparison of Common versus Slender, while acknowledging that field identification is iffy, and the Minnesota Dragonfly website has some nice comparisons of Common, Spiny (E. spinigera) and Beaverpond (E. canis).
Other strange Epitheca's can be found. Here is a post we did (with a link to a short paper we wrote) on a Common Baskettail with extensive dark wing tips.
There is so much to understand regarding the status and distribution of this species complex in Michigan. More specimens are needed, especially across southern Michigan, for future researchers to go examine so that these mysteries can be unraveled.
Further reading:
Donnelly, N. [T. W.] 2001. Taxonomic problems with North American Odonate species -- a last appeal for information. Argia 13(2):5-10.
Donnelly, N. [T. W.] 2003. Problems with Tetragoneuria! Argia 14(4):10-11.
Donnelly, N. [T. W.] 2006. Rediscovery of Intergrade Epitheca in Southern Indiana. Argia 18(2):12-13. Scroll to page 12 and read this brief note -- it sums up the problem in the region nicely!
O'Brien, M. 2004. Epitheca costalis (Stripe-winged Baskettail) in Michigan: Update. Williamsonia 8(3):1-2. (PDF)
O'Brien, M. 2005 How to identify Epitheca costalis. Williamsonia 9(1):7-9 (PDF)
Posted by JAC 2 comments
Email ThisBlogThis!Share to TwitterShare to FacebookShare to Pinterest
Newer Posts Older Posts Home
Subscribe to: Posts (Atom)
Give the Gift of Amazon Prime