With all the weird weather, Stylurus and I have ended up getting our first real ode hunting in by going south, back to Kentucky, where Stylurus had to attend a meeting. We had time for a a few hours at Berheim Forest, a huge arboretum and forest reserve south of Louisville.

Fragile Forktail, Ishnura posita -- 5
Common Green Darner, Anax junius -- 1
Springtime Darner, Basiaeschna janata -- 2. Yippee! Good looks, only wish I could have found one perched.
Lancet Clubtail, Gomphus exilis -- 10, all teneral females (below). It made us wonder if the males had emerged earlier, perhaps during a warm spell prior to the early April freeze. 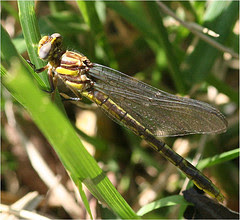 Common Baskettail, Epitheca cynosura -- 20. At least, we presume that's what these all were, but hard to say without netting them. See any of my tedious previous posts on baskettails. 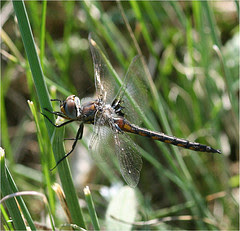 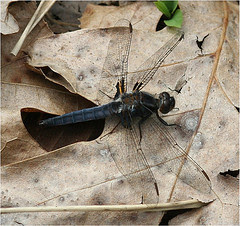 That was it, pretty paltry showing, but we are glad to have had the chance to get out and do some searching and photographing. Hopefully, we will be able to do so again tomorrow on our way home.
Posted by JAC 0 comments
Email ThisBlogThis!Share to TwitterShare to FacebookShare to Pinterest

We're you worried the Urban Dragon Hunters had eyeballed their last Enallagma? No, we're still here, having endured another Michigan winter and looking forward to the 2007 field season. I saw my first adult ode today, presumably a Common Green Darner, although I was going 30 MPH in one direction and it was speeding in another. I think this is one of the earliest records in the state.

As it is supposed to snow tomorrow, I hope the darner reversed course. And it probably means things will be quiet here again for awhile. But we will return!
Posted by JAC 0 comments
Email ThisBlogThis!Share to TwitterShare to FacebookShare to Pinterest
Newer Posts Older Posts Home
Subscribe to: Posts (Atom)
Give the Gift of Amazon Prime