The warm weather of the 2011/12 winter and early spring brought a flurry of reports for Anax junius.

For a variety of reasons I haven't spent time in the field away from home or the campus of my workplace. Fortunately, my workplace in Farmington Hills (Oakland County) has multiple ponds on site which gives opportunities for breeding and migratory species.

On March 28th it was quite windy, but sunny. I found a female Eastern Forktail (Ischnura verticalis) perched in an area of lawn downwind of one pond. Just as I reached down to grab the early individual, a gust of wind picked her up and blew her away, not to be seen again.

My second species for the year didn't occur until two weeks later. On April 12th, a female Common Green Darner (A. junius) flew by during my lunchtime walk. Then on April 13th, I found this female perching/hunting along a sunny hedgerow: 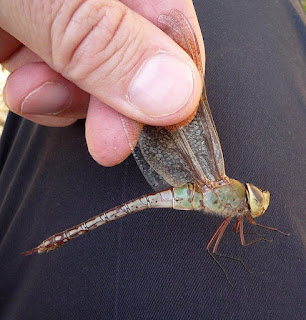