Julie Craves, Mark O'Brien, and I made a visit to the Fox Science Preserve outside Ann Arbor on July 4, 2014.  Earlier in the season (late May) I found Painted Skimmers (L. semifasciata) which was collected for a second county voucher, many Carolina Saddlebags (T. carolina), and a couple Comet Darners (A. longipes).  This last species would be a new species for the county if we could voucher it on this outing.


Immediately on this 4th of July visit, we found additional Painted Skimmers and Carolina Saddlebags.  Shortly after looking for odes around the larger, deeper pond we had a male Comet Darner fly past.  These fast, strong flyers always seem to be just out of net's reach.  The water in the larger pond was a bit deeper than our rubber boots were high which prevented access to the entire area, unless we wanted to have wet feet.  This was a dry-foot day for me.

We found a couple female Comet Darners apparently hunting or searching for oviposition sites.  The two locations frequented most often were separated by tall vegetation.  Mark stood in one location and I stayed in the more open area trying to inform Mark when a female was approaching his secluded section.  The female generally flew across the deeper water several inches above the water's surface.  She'd then fly through the vegetation (cattails, woody plants) at the same height. 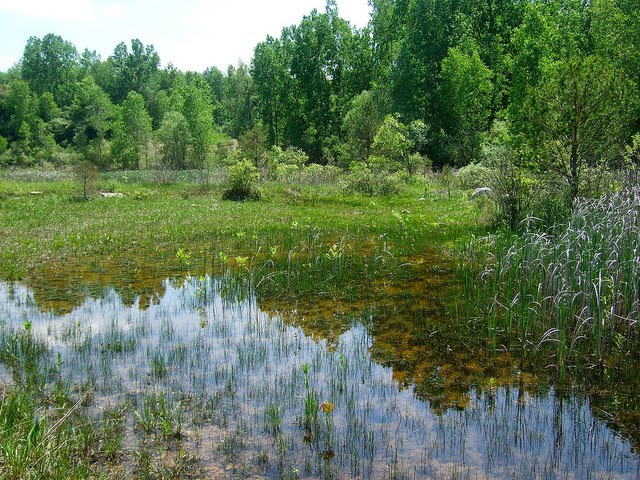 At one point, Mark yelled out and was swinging at a female that seemed to "attack" him in the midst of the vegetation.  Shortly, thereafter he emerged with the first county record of Anax longipes.

At one point during the afternoon we witnessed an interesting behavior of a male and female Comet Darner.  The pair was coupled initially, then the female flew across the pond seeming to act like the other female hunting for food or an oviposition site. At the same time, the male flew several inches behind her at or just above her height of flight, which was several inches above the water.  It was as if the male was guarding or protecting the female during her foray.

This was another successful outing within a few miles of our home and great to be in the field with another O'Brien of Washtenaw County.

I combined attending this Dragonfly Society of the Americas meeting with the Ophiogomphus searches recorded in previous posts and followed by a quick family visit in western WI.

The meeting presentations were great with a variety of topics and the field trip locations provided access to great snaketail and clubtail habitat.  The Chippewa River just west of town was teaming with dragonflies.


Bryan Pfeiffer did a few blog posts noting finds and experiences of the DSA meeting here.

Others have much better photos than me, but here's a few photos of the target species at this location.  Of course, there were many other species flying in large numbers.


The location and community hosting this DSA meeting was very welcoming.  If one wants to find an abundance of snaketails, the Ladysmith area is highly recommended.