There's a spinyleg on the Johnson

There are three major rivers here in Wayne Co., MI. The Detroit River forms the eastern border, and also the border between the U.S. and Canada. The Huron River enters from the west then flows south where it forms the southeastern border of the county before it empties into Lake Erie. The Rouge River, a tributary of the Detroit River, goes through my hometown and my place of work; I live in its watershed, I support research and protection of the Rouge, and it's the river I consider "my" home river. Unfortunately, it is also the most impaired of the three rivers. While it has come a long way in the last 30 years, it is still troubled by extremely variable flow rates, sedimentation, and pollution.Not surprisingly, most of the interesting species of lotic odes we find in the county are not in the Rouge watershed. Even the primary tributaries such as Tonquish, Fellows, and Johnson creeks suffer from the same problems as the main branches.

The Johnson, however, has the most potential for interesting odes. It is spring-fed along much of its length, and one of only three coldwater creeks in southeast Michigan. Brown trout are stocked here (although not many overwinter) and the state endangered Redside Dace are also found in the Johnson. We've had trouble finding many interesting odes over the years, though. Ever-growing development has increased sedimentation and temperatures in the creek. A lot of it is on private property.

One place with easy access is Fish Hatchery Park in Northville.

View Larger Map
It was the site of the first federal fish hatchery, which operated from 1880-1957 (it was established 6 years earlier but under state control). Here's an old postcard from "back in the day." 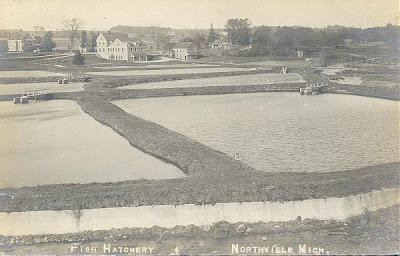 There is a short trail along the creek that has some pretty stretches, like the one below, but there are steep, eroded hillsides and outfalls from residential areas. Our lack of luck has meant we have not visited here often at all, and not in several years. 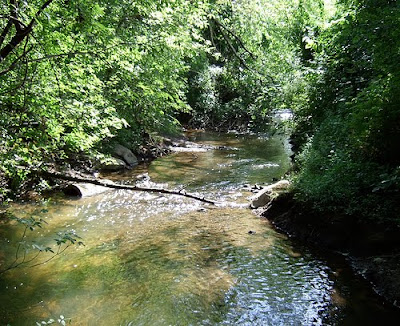 At the park, Johnson Creek runs by the only remaining fish pond. We dropped by a couple of weeks ago and wandered over. I saw three brown trout in the creek, and Stylurus saw a big dragonfly zoom by and perch on some overhanging vegetation. We both got great looks -- it was a Black-shouldered Spinyleg (Dromogomphus spinosus) -- a new county record! Standing on the side of the creek and looking at it only 12 feet away through binoculars, the spines on the legs looked like tree branches. 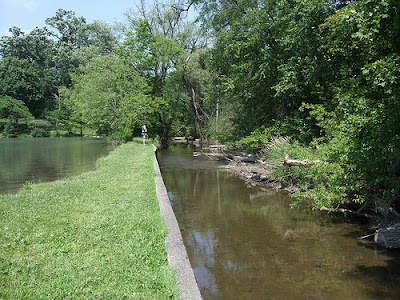 Stylurus hopped in the creek. This was not going to be an easy swing, as the insect could easily see the approach, and branches were in the way. Indeed, a voucher was not to be had this day. Or the next weekend, when we saw one patrolling that quickly retreated to the trees. Or the weekend after that, when we didn't see one at all. Thus, the record remains unofficial. You know where we'll be this weekend...
Posted by JAC
Email ThisBlogThis!Share to TwitterShare to FacebookShare to Pinterest

And good luck to you!! ~karen