Our holiday weekend was a leisurely ride through small towns in Ohio into northern Kentucky, with the goal of recording some species for the KY odonata survey in the very sparsely covered counties near the Ohio River. We made several stops yesterday. In a backwater leading to the Ohio near Augusta, a teneral female gomphid fluttered by. She turned out to be a Flag-tailed Spinyleg (Dromogomphus spoliatus). 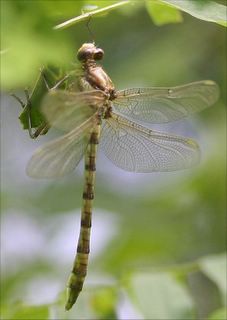 Teneral female Flag-tailed Spinyleg (you can see the spines on her thighs). I like the commuter strap-hanger look.

Near Foster, we went to a boat launch where we could walk along the Ohio, dodging every type of garbage known to man from holiday party boats. Please, people. There were a number of medium-sized gomphids with paddle-like clubs. On the plus side, they tended to perch facing away from us, so we could sneak up fairly close. On the minus side, a good photo was hard to take, and it took us forever to catch one because we had to creep over ankle-twisting rocks. They turned out to be Cobra Clubtails (Gomphus vastus). 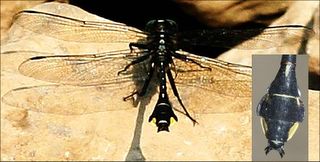 As we were leaving there, a very teneral clubtail, on its maiden flight, caught the light. Without a whole lot of reference materials, we are uncertain what it is. A cursory look at the wing veins led me to think Ophiogomphus (snaketail), but habitat and lack of extensive green on the thorax seems to vote against that. Stylurus thinks it's a Stylurus, and I am leaning to Stylurus notatus, the Elusive Clubtail. The habitat, size, markings (such as they are) look right. If so, it will be the second one we've stumbled across, when many people can never find one; our first was near the Mississippi in Wisconsin.
Posted by JAC
Email ThisBlogThis!Share to TwitterShare to FacebookShare to Pinterest