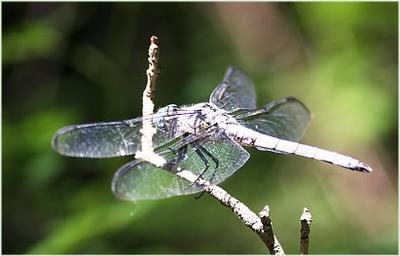 Great Blue Skimmer (Libellula vibrans) was first recorded in Michigan in 1995, described in a paper published (in Japanese) in the journal Aeschna by Tokihiro Nishida. He had one on 22 June 1995, and photographed a male 10 July 1995, at a small wooded wetland in Westland, Wayne Co. If he obtained a specimen, it is not in the University of Michigan odonata collection.

I think I've looked at this paper, with its tantalizing color photos of species in the county that I have yet to find, dozens of times. In 2004, I went to what I figured HAD to be the swamp Nishida described in Westland, an extremely built-up community. It could only be at Holliday Nature Preserve, a county park. Although I returned again and again, finding other species he noted there, there was no sign of L. vibrans. The swamp also appeared to be filling in with button bush and fallen trees, as seen below. 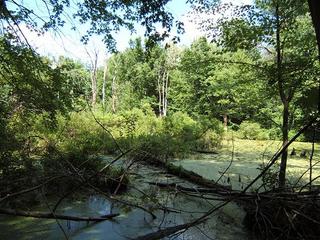 Accessible wooded ponds are hard to come by in this county. One other looked promising, but repeated visits in 2005 did not turn up this species. Perhaps Nishida's Great Blue Skimmers were just wanderers, and would not be found again without luck, and a year when conditions, perhaps drought in the southeast, brought L. vibrans north to Michigan.

I thought perhaps this might be the lucky year. The Northeast Odes listserv noted an influx of Great Blue Skimmers in New York state. Mark O'Brien reported sightings in Washtenaw Co. just last week. In fact, he told me he was going to go try to voucher one for the first official state record on Saturday. Alas, I was committed to do a survey at Humbug.

We finished our survey of Humbug yesterday (which did not turn up Comet Darner, Painted Skimmer, or any other interesting odonate) sooner than expected, so Stylurus and I decided to head up to Holliday NP. Within five minutes of arrival, I called excitedly over our two-way radios "It's here! I have a male over here!" Just like the books said, this Great Blue Skimmer kept returning to his perch in the dappled sunlight after looping out over the swamp. The very mucky, duckweed-covered-water-0f-indeterminate-depth swamp. Right in front of me. So close and so obstructed by branches I could not possibly get a good swing. I had promised myself if I finally found this thing I'd go in the water after it. 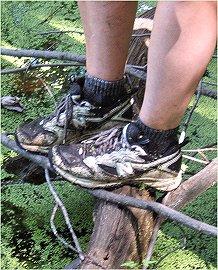 Momentarily, I was standing in some very fragrant, warm-as-piss gunk. Stylurus arrived in time to see our bug quite well, before it flew out over the button bushes. We hunted as best we could to no avail.


This brought about a change in today's plans. After doing some other surveying, we arrived at Holliday at about 1:30 PM, wearing rubber boots in 90 degree weather. We went in separate directions, and searched unsuccessfully for half an hour. I sat on a moss and raccoon-crap covered stump, wondering how many dozen Blue Dashers I could stand watching in this reeking place. Suddenly, the radio beeped...Stylurus had two males staked out at the opposite side of the swamp!

One cannot race through this area. The water was opaque and filled with downed trees. I made it half way around and onto "land" before I stepped into a hole and collapsed in the putrid mud. I can't cut to the chase -- that was it -- but suffice to say we had a number of males in a much shallower (albeit no less stinky) spot. We were able to obtain some mediocre photos and a voucher for Michigan's first state record -- 10 years to the day that Nishida had one in the exact same place. Domo arigato, Nishida-san. 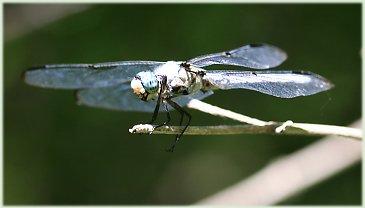 Nishida, T. 1999. The odonata collected in the United States of America, mainly in the State of Michigan. Aeshna 36:1-20.