Yesterday we revisted a nice wetland recently made accessible by the development of a new municipal park. The park is essentially a lot of ball fields, but if you walk beyond them, through an extensive old field community, you reach a short rise that overlooks a large grassy wetland. This is just across the street from the previously mentioned retention ponds that have such interesting boggy species of mysterious origin. On the other side of the wetland, new development is also taking place, in what used to be an old peat mine. Ah-hah! This must be where our Nannothemis, Amphiagrion, and Nehalennia are coming from. We were hopeful that we might find emeralds there, too.

Alas, we didn't find Jack Schitt there. It was fairly dry, since it's been so hot, and maybe the density of the vegetation, with no open spots, makes it less ideal than we had hoped. We wandered around -- still lots of interesting land and birds -- and ended up at two retention ponds behind a new megachurch of enigmatic denomination. The ponds looked a year old. There was a lot of activity by the usual species: pondhawks and dashers, whitetails and Widow Skimmers, etc. There were several Carolina Saddlebags (Tramea carolina) in the mix, a species we only located in the county last year. Stylurus set about trying to nab one, while I scanned the grass for damsels. 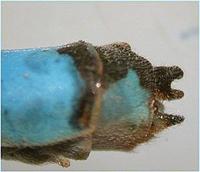 I have been on the lookout five years for any of the suite of similar bluets that have not been found in the county at all or for many years: Boreal (Enallagma boreale), Northern (E. cyathigerum), Hagen's (E. hageni), or Marsh (E. ebrium). I have looked at Familiar Bluets until I'm, uh, blue in the face. Today was no exception. Familiar, familiar, familiar. All those cerci with the funny little pale tubercule. Finally my persistance paid off, and I found one with forked superior cerci (left). Marsh Bluet! I went on to find that about a third of the bluets at the pond were Marsh, the rest Familiar. After awhile, I could see the Marsh were a little smaller and paler blue, but the patterns were pretty much alike. The only previous specimen of Marsh Bluet in the county is from 1904.

As we were getting ready to leave, what should appear over one of the ponds. You guessed it: Comet Darner. It flew only briefly, then perched about 17 feet up in a tree in the shade. It was too distant and the lighting too poor for a decent photo, but it offered us long looks through binoculars. Stylurus put both our sets of net poles together and still couldn't reach it. It flew off deeper into the trees, and although we sat there in the 94F heat for another 45 minutes, it never reappeared. 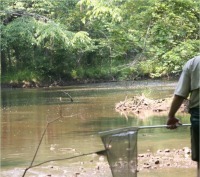 Today we went to Lenawee Co., back to Indian Trails Crossing Park. It is pleasant to walk along, or in, the River Raisin looking for gomphids and Macromia. It is mostly shallow, sandy or gravelly, and clean (or at least it seems pretty clean. I'll let you know if any of the scratches, scrapes, or fly bites on my legs become hideously infected.). Although we saw a couple Macromia, and some Black-shouldered Spinylegs, it was unproductive overall. But scenic.
Posted by JAC
Email ThisBlogThis!Share to TwitterShare to FacebookShare to Pinterest