More on the Painted Skimmer

Due to my fixation with the Comet Darner, Anax longipes, I have given short shrift to the significance of the record of the Painted Skimmer, Libellula semifasciata, that I obtained on June 16. I'd do well to dwell on my successes rather than my failures. 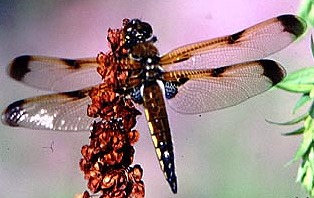 There are only four specimen records of L. semifasciata for Michigan; the dates are 1892, two from 1908, and one "recent" record from 1936. Sight records have been noted (Kielb 1996), but without verification. In 2001, O'Brien (2002) photographed what he thought was L. semifasciata, albeit a slightly strange one (above), and later found out that it was actually a rare form of the Four-spotted Skimmer, Libellula quadrimacula (O'Brien 2003). L. quadrimaculata is a very widespread species, known in the Europe as the Four-spotted Chaser, and is more common in Michigan (although there has not been a Wayne Co. record since 1917). The form Mark saw was L. q. praenubila, a form with more highly colored wingtips that is found in Europe, with only one reference to a North American sighting, from Maine (Harvey 1901). A typical female L. quadrimaculata can be seen here, and compared to the praenubila form here.

I've examined my female specimen and verified that it is indeed L. semifasciata and not L. q. praenubila. Among the diagnotic features are a yellow stigma bordered in black, rather than all brown in L. quadrimaculata; fewer bridge crossveins on the forewing than in L. quadrimaculata; and, in females, a widened flange on abdominal segment 8, not present in L. quadrimaculata. Photos of these features in the June 16 specimen are below, taken through a dissecting microscope and adjusted for the resulting lousy exposure. 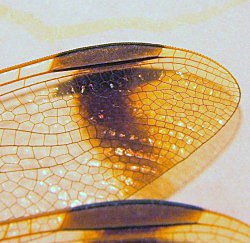 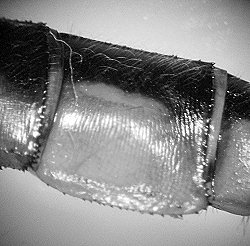 Photos of L. semifasciata -- the whole bug, alive in living color -- can be seen here, here, and here. The last image is a biggy, but shows the pterostigma and wing veination especially well.

The Painted Skimmer is considered rare in Ontario, with only three sighting records in Essex Co. in the Ontario Odonata Atlas. Thus, this Wayne Co. record is a smashingly good find.

And, as an addendum, today we found ANOTHER Painted Skimmer about ten miles northwest from Humbug, at a great site where we have found many other interesting odes -- a marsh and wooded wetland complex slated for development. It quickly flew over a fence, so we were unable to photograph it or examine it. Perhaps this species is more common than previously believed; we'll certainly be looking for it in earnest in the coming weeks to clarify the situation.

I believe that I have a painted skimmer I my Burlington, Ontario garden as of Wednesday June 3, 2014.
I have a picture.
Angie

Angie, it would be great to post your photo to Odonata Central http://www.odonatacentral.org/ There was a large influx of this species north this year. Amazingly, we saw dozens in some locations.