I have been doing survey work for the Detroit River International Wildlife Refuge at their Humbug Marsh Unit, the last bit of natural shoreline on the U.S. side of the river. It was recently acquired from developers, after a long fight, and will be the gateway to the refuge. This property is not currently open to the public, and baseline flora and fauna surveys are being undertaken to prepare for site planning and restoration.

I didn't have high hopes for odonata here. Wetlands are severely impacted by Phragmites, there are no permanent ponds or streams, water quality is mediocre, and I didn't think the characteristics of the Detroit River at this location were really conducive to a variety of odes. Yesterday was the first day I have been there since our hot spell, and what a surprise!

I was initially joined by USFWS employee Emily D. (I have no idea if she wants fan mail, so I won't give her whole name) in the southern portion of the unit, which is the most disturbed. A single Calico Pennant (Celithemis elisa) and the pedestrian Familiar Bluet (Enallagma civile) were all we initially saw. I had just finished explaning how amazing it was to me that I'd been able to find over 40 new species for the county when Emily, using my crappy spare binoculars, asked "What's this one?" I looked where she was pointing and told her "Oh! That's a county record!" After several tries I was able to catch a nice Painted Skimmer (Libellua semifasciata). There is a sight/literature record for Wayne Co., but this is the first specimen. 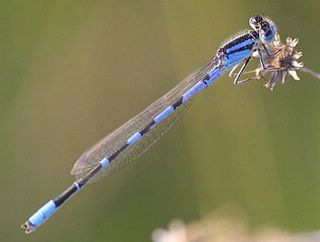 We were able to find a few other common species, such as Black Saddlebags, and an early Ruby Meadowhawk (Sympetrum rubicundulum). After Emily departed, I was able to secure a Spot-winged Glider (Pantala hymenaea), a difficult bug to catch. 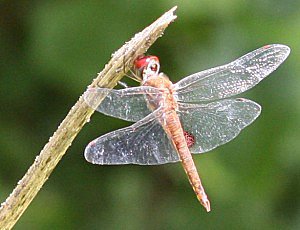 Brimming with overconfidence, I was standing and patiently trying to see if I could observe nesting behavior in a catbird, and whoosh! a large ode zooms by at knee height, pivots, approaches me, feints, hovers near me wondering about that huge cave, formed by my mouth hanging open (did I hear laughing?), and takes off over my head. Once again, my nemesis, the Comet Darner (Anax longipes). Oh, yes, I encountered this thing four more times over the next couple of hours, cruising the trail or perching just out of reach. My last look at it was it taking off over a canal that empties into the Detroit River. This species remains a sight record only for Wayne Co.

Comet Darners typically inhabit fishless ponds, and I don't think there is appropriate habitat nearby, although there are a lot industrial properties in the vicinity, some of which have ponds. So perhaps I won't have another swing at this ode...but who knows. I ended up the day with 18 odonate species (as well as 17 butterfly and 33 bird species), and strong motivation to return to find more.
Posted by JAC
Email ThisBlogThis!Share to TwitterShare to FacebookShare to Pinterest