Bring on the Saddlebags

On 6/23, I headed to Pte. Mouillee SGA again in hopes of finding saddlebags.  (It would be good to find the second state record for T. calverti)  It was a windier day compared to my last trip to Pte. Moo in Monroe County.  The dragonflies were less abundant on the levees and they were likely in areas sheltered by the wind.  However, I was looking for saddlebags (Tramea sp.) which will still be found flying out in the open with a stiff breeze.  I had walked about half the distance of the previous visit and only saw a few large odes, but then a reddish saddlebags flew past and I followed it down another side levee.

The good thing about a stiff breeze is that the odes will generally be slowed when flying against the wind, and that makes netting them much easier.  While watching the flight path of this individual, I was able to align myself near some vegetation and swing at an opportune time.  Having the dragonfly in hand made the identification much easier of this uncommon species for Michigan.  It was a male Red Saddlebags (T. onusta) and a new early record for the state: 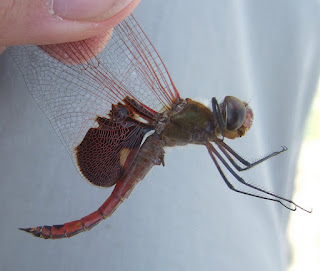 This hike involved many fewer mayflies, but the deer flies were in much greater abundance and a greater annoyance since they bite.

I continued down this levee in the Nelson Unit and found many (10+) saddlebags working the downwind side of the vegetation.  There were even two coupled pairs of T. onusta.

Here is a female Spot-winged Glider: 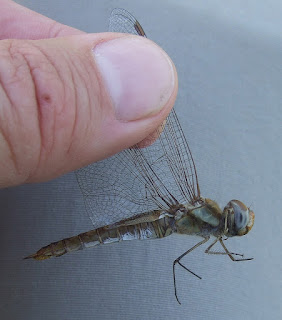 After leaving the Monroe County portion of the SGA, I went north to the Wayne County side with is also the headquarters.  While checking a couple of the open fields, I found another coupled pair of Red Saddlebags (T. onusta)!

Anyone along the Lake Erie area should be on the lookout for the reddish saddlebags this summer.  It's possible one could turn up these uncommon to rare species.
Posted by Darrin OBrien
Email ThisBlogThis!Share to TwitterShare to FacebookShare to Pinterest