A Plethora of Anax Exuviae

As noted previously, I've been collecting specimens for the Stable Isotope Analysis project which focuses on Common Green Darners (Anax junius).  This project has a need to collect adults early in the season and mid-season which may help show where the migratory portion of the population moves.  Additionally, exuviae (i.e. the larval skin) are collected which give a more definitive baseline location for the isotope feedback since the larvae don't migrate.  However, finding exuviae can be difficult, but with a proper search image it is possible.

On June 24th, I checked a pond at Lower Huron Metropark (Wayne County) where I've seen good numbers of darner exuviae in past years.  Once again, I found the distinctive skins on dead cattail stalks about 1/2 to 2 feet above the waterline, primarily on the south edge of the pond.  Using my net to coax the delicate skins off the vegetation, I was able to collect 8 exuviae.  While doing this, I had several Common Green Darners (A. junius) and two or three of the uncommon Comet Darner (A. longipes) flying around my net.  Of course, they wouldn't do this if I was prepared to swing.

I didn't attempt to ID the species of the exuviae and had just assumed they were A. junius.  At home, I examined them under magnification and found 7 of the 8 to be A. longipes!  Only one A. junius for the project (in the vial).  ;^( 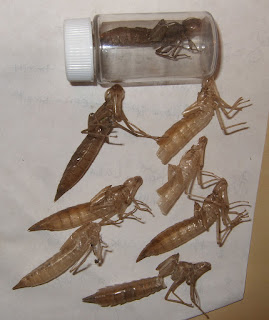 On June 27th, during my lunch hour, I checked a retention pond of an abandoned subdivision in Novi (Oakland County) that is ringed by cattails.  I began searching for exuviae and spied several darner skins along the south edge of the pond (I don't know if there is anything significant about this).  While collecting with my net again, I had multiple A. junius and a single A. longipes fly by.  This day's collection included 6 exuviae of A. junius.  This is a photo of a Black Saddlebags (Tramea lacerata) exuvia at the same location: 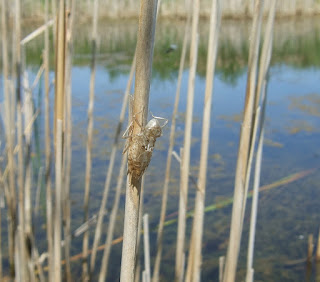 On July 4th, I returned to the Lower Huron Metropark pond and found 2 A. junius exuviae in the 30 minutes I had to search.  Of course, I had male and female A. longipes flying around, in addition to a few A. junius.


The number of Comet Darners (A. longipes) this year is amazing to me.  The first voucher for MI was a nymph in Livingston County in 1996.  It was some years later before the next vouchers were obtained. Julie and I obtained the first county records for Lenawee (2003), Wayne (2007), and Oakland (2007).  Of course, others have observed this species flying in additional locations, but it seems the numbers have "exploded" in the past few years. Finding so many exuviae of this species at one location as noted above is interesting.  Could it have been influenced by mild (or nonexistent) winter we experienced in 2011/12?

Darrin,
I think Jeff Sommer caught A. longipes in his yard in Saginaw Co., so I agree that this is a great season for them. Of course, I have yet to see one this summer :/

At least you caught one or one caught you this year near Ann Arbor!