A Pair of Saddlebags

Today I decided to check out three recently created ponds (2006 or 2007) at Lower Huron Metropark in Wayne County, Michigan to see if any mature meadowhawks (Sympetrum sp.) would be present.

Almost immediately I spotted a reddish-colored dragonfly over the largest of the ponds. I presumed it was a Carolina Saddlebags (Tramea carolina), but I moved to one end of the pond to get a better view. While waiting, a large darner with a bright red abdomen appeared, Comet Darner (Anax longipes)!

The saddlebags decided to fly over my head, while I was calling Nannothemis on my cellphone with the news and with a one-handed swing, I nabbed the Carolina Saddlebags (T. carolina).
This male is one of several records for the county and one of only a couple dozen for the state. 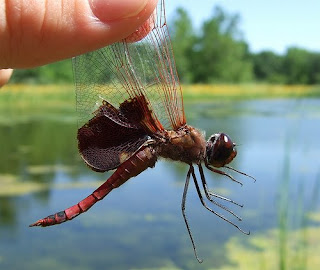 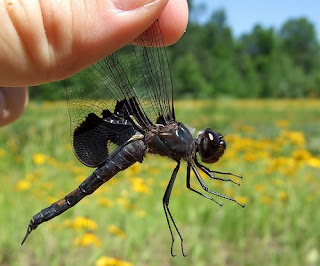 After shooting these photos, I decided to look for the Comet Darner (A. longipes). Surprisingly, two or three individuals were present, but none of them accepted my offer for an in-the-hand photo. There are only a handful of records for this species in the state.

At one point, a darner flew by that may have had blue eyes. Could this have been a Spatterdock Darner (Rhionaeshna mutata)?

No meadowhawks today, but other excitement was substituted.
We'll see if we can make it back to this location in the next week or two.
Posted by JAC
Email ThisBlogThis!Share to TwitterShare to FacebookShare to Pinterest