After last week's observation of Comet Darners (Anax longipes) at Lower Huron Metropark, I decided to look for them again. Immediately upon arriving at the middle of the three ponds near the new water park on July 19th, I saw a male darner patrolling. Soon after this, a second male appeared.

Here's a view of the middle pond: 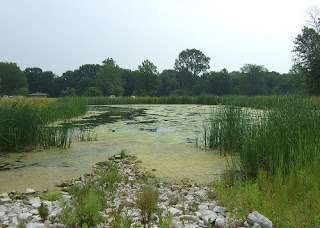 One or both of these individuals would patrol and leave the ponds regularly. They were absent most of the time. Finally, after an hour of watching and waiting, one of the males flew towards the upper pond. I was hoping to catch it as it returned to the middle pond, so I quickly followed.

Here's a view of the upper pond: 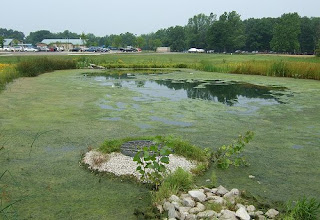 A few minutes later the darner flew near me while chasing a Black Saddlebags (Tramea lacerata).... and it was in the net. This is the second voucher for the county and the ninth adult for the state. 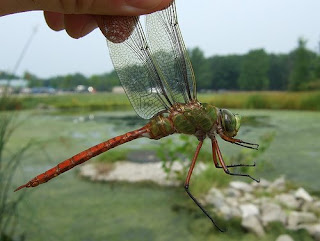 ... and here's a shot of the top of the head (lacking the bullseye of the Common Green Darner - A. junius) 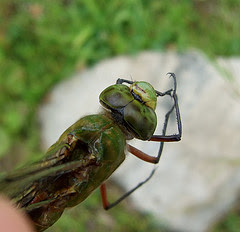 More adventures to come...
Posted by JAC
Email ThisBlogThis!Share to TwitterShare to FacebookShare to Pinterest

Dope On The Slope said...

My God! Those things are huge. I remember collecting the rather large larvae of A. junius in graduate school, but it's been a long while since I've seen an adult darner. Not that common here in skimmer dominated Brooklyn.

These are huge and always a treat to find flying here in MI.