No cobras, but another surprise

Last weekend's weather was unpredictable and hampered our attempts to look for Cobra Clubtails (Gomphus vastus) at Humbug Marsh. We did make it out on Sunday afternoon, even though it was spitting rain here and there. Another problem was high water on the Detroit River. Thus, we didn't have shoreline to search for clubtails.

Very few dragonflies were flying due to the breeze and light rain in the Chrysler property.

One male Eastern Amberwing (Perithemis tenera) was found in the grass. I am accustomed to seeing these out over the water. 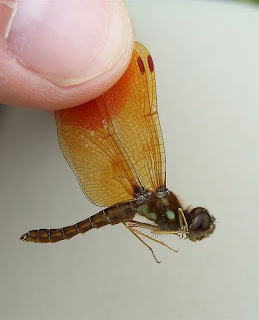 It was also nice to find a female Calico Pennant (Celithemis elisa). 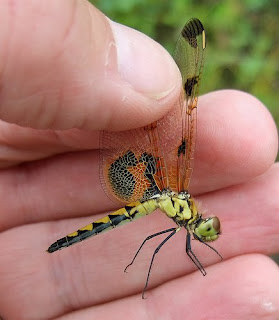 We decided to check another area of the refuge near some old growth Hickory-Oak forest which includes a few open areas bordered by dogwoods. Immediately upon entering one open area I had a large, lighter-colored dragonfly flitter a few feet and land. I quickly thought this was a female Great Blue Skimmer (Libellula vibrans) and called Nannothemis up to the location since she has the better camera for a photo. We saw one male at the refuge in 2007, but we were not able to obtain photograph of it.

We ended up capturing this skimmer and realized this was an immature male Great Blue Skimmer (L. vibrans). 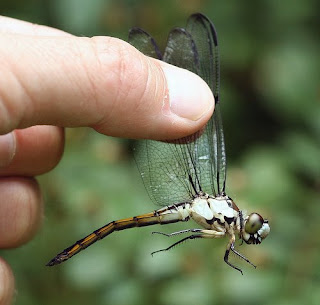 Could this be evidence of L. vibrans overwintering in Michigan?
Posted by JAC
Email ThisBlogThis!Share to TwitterShare to FacebookShare to Pinterest