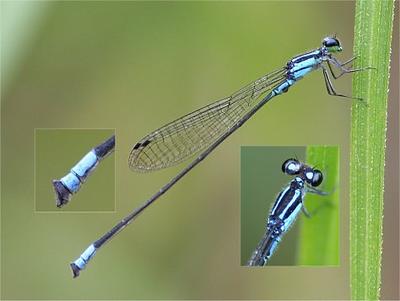 Meanwhile, I've been working through the identifications of odonata I photographed on my recent tropical trip, a task that could not be accomplished without the expert opinions of Dennis Paulson, Nick Donnelly, and Sid Dunkle. One of the cooler damselflies I saw was an Acanthagrion, or wedgetail. The Mexican Wedgetail (Acanthagrion quadratum) occurs in the southwestern U.S., but I've never seen one. This photo is likely A. trilobatum. You can see how they got their name. I'll post a list of positively ID'd species soon, as well as more photos. I'll be providing my photos to Paulson's Odonata Biodiversity web pages, which were a great resource for me.
Posted by JAC
Email ThisBlogThis!Share to TwitterShare to FacebookShare to Pinterest