On July 5, 2009, Nannothemis and I made a visit to the Humbug Marsh Unit of the Detroit River International Wildlife Refuge in hopes of finding a Cobra Clubtail (Gomphus vastus) as we had last year.

We searched the open areas near the Detroit River with no luck finding the target clubtail, but we did see the first Russet-tipped Clubtails (Stylurus plagiatus) of the year. In all there were at least six individuals (three males and three females). Here is one of the females: 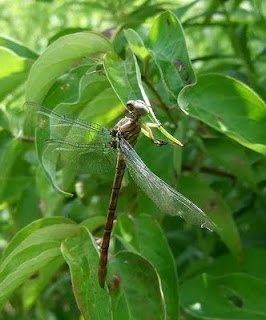 On our way back to the vehicle, Nannothemis spotted a female Band-winged Meadowhawk (Sympetrum semicinctum). This marks the 45th species for the unit since starting surveys here a few years ago. 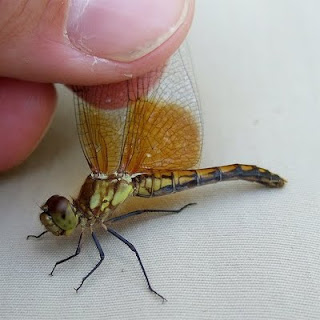 I'm sure there are more to find in the coming years as there are plans to daylight a drain and create pond areas in a portion of the unit.
Posted by Darrin OBrien
Email ThisBlogThis!Share to TwitterShare to FacebookShare to Pinterest