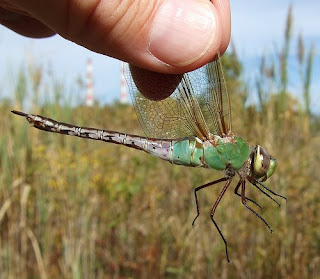 ... of course, this may be the first Michigan species to photograph in 2009.
Posted by Darrin OBrien
Email ThisBlogThis!Share to TwitterShare to FacebookShare to Pinterest

I'm still seeing some dragonflies (and picking them out of mist nets) here in Cape May. Most are Common Green Darners, but I think I have seen a few others recently as well.

Thanks for stopping by my blog, I appreciate the I.D.'s! This past Sunday I still had the Darners and Meadowhawks. Monday we had snow flurries and today as well here in central Ohio. I doubt I'll see them anymore this year. You have a great blog here...very informative.

thanks for the comments, John and spookydragonfly

We'll see if we can get south this winter to find some winter dragonflies. ;^)

I was in Mackinac Co on the 17th and found lots of Sympetrum vicinum and S.obtrusum, as well as several S. corruptum, a few Anax junius,and a possible Aeshna clepsydra. You just never know what you'll find along Lake Michigan in the fall.