Stream Cruiser: One for the books

One ode I did not note in my previous post about Kentucky was a brown-and-yellow, medium-sized dragonfly we saw in several places while at Berheim Forest. They were patrolling the margins of two lakes, one a large (32 acre) lake, the other lake about a third that size. They were in constant motion, never perching, and hard to get on with binoculars. We could see the cerci were pale. This had us stumped. Unicorn Clubtail (Arigomphus villosipes) patrols like this and has pale cerci, but it was early for them, and they also frequently perch on flat surfaces.

Sylurus thought these could be Stream Cruisers (Didymops transversa). That's what they looked like, but according to our references, the habitat and behavior were not quite right:
We returned the next day and asked permission to try to net one and identify it. They were out again, and Stylurus positioned himself in the flight path of one of the insects. Time passed. And some more time. Eventually, I walked away to photograph some other bugs. Shortly thereafter, Stylurus came happily up the path with the subject dangling from this fingers. 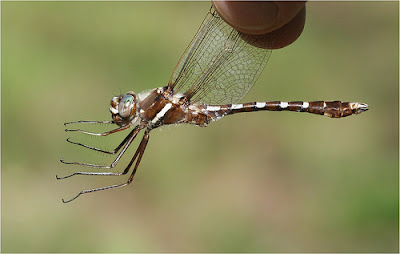 It was a Stream Cruiser after all. I can't remember which book I read this in, but one description noted the "long spidery legs" of this species. This photo sure shows that!

We placed the cruiser on a shrub near the lake, where it obligingly hung around for a few more photos. 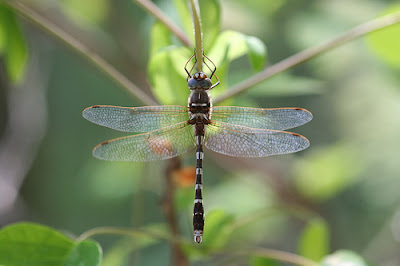 When we reported our findings to Ellis Laudermilk, the invertebrate biologist for Kentucky, he said he could not recall Stream Cruisers cruising lakes. This was a lifer for both of us.