Latest paper on an aberrant dragonfly

Publications on Odonata (or other taxa, for that matter) with abnormal coloration or pattern are important to help us understand the range of variations within and among species and consider biological and evolutionary impacts.

Our latest note on a weird Common Baskettail was just published in the most recent issue of the Argia: 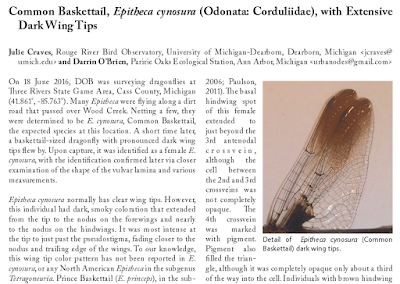 We have a page with all of our ode papers here; and more insect papers as well as other publications can be found at Julie's ResearchGate page.
Posted by JAC 0 comments
Email ThisBlogThis!Share to TwitterShare to FacebookShare to Pinterest

Cobras on the Huron

Cobra Clubtails (Gomphus vastus) had not been vouchered for Washtenaw County, Michigan.  Given this county is one of the most surveyed in the state, I found this to be curious and made it a yearly quest after we moved here a few years ago.

This species has been observed and photographed several times over the recent years, but I don't know if they are more common now than in decades past.  Why wouldn't have any of the entomologists have collected a voucher in the past decades, if they were present?  (Of course, in my experience this is one of the more difficult clubtails to capture with a net)

Delhi Metropark appears to have a good population and easy access to both river and upland habitat.  Since this clubtail flies primarily in June, the weather in Michigan can be quite uncooperative.

Some years the water is quite high, making access less than optimal.  Other years, it's rainy or cold, limiting the occurrence of the individuals.  Then there's the human influence: the metroparks show a lack of understanding regarding stewardship of natural areas.  The focus is on human recreation, even though their properties contain some of the best, and sometimes the only, natural habitat in regions of metro Detroit.  This year on June 24th, I found all of the upland areas (including non-turf grass) to be mowed.  Essentially nothing was left, except the edges with the woody, non-native invasives. Much of these mowed areas contained many native plants used by a variety of fauna, and are great perching and hunting areas for the adult dragonflies.  Maybe this helped me find an adult Cobra Clubtail?  As soon as I made it to an area between buckthorns (Rhamnus sp.),  an adult landed with its meal.  This female Cobra Clubtail was the only individual found on June 24th:

I also had time to visit Dexter-Huron Metropark which is a few miles upstream of Delhi.  The Huron River water level was low and allowed for easy wading.  A couple Cobra Clubtails were patrolling the river along with a couple Rusty Snaketails (Ophiogomphus rupensulensis).


It was nice to find another location with the clubtails, but an interesting sight was this water snake with its meal (I assume it's a bullhead):

...and the target species of the day:

It's difficult to know why this clubtail species wasn't vouchered in the past decades for Washtenaw County, given that other species utilizing the same river habitats were present.  At least we know the water quality and river structure allows this species' population to exist at this time.

The latest issue (Vol 28, Issue 1) of Argia includes our paper on the Great Spreadwing in Michigan.  Click here for a link to the paper (scroll down).

We've published a paper on a new species for Michigan: Allegheny River Cruiser (Macromia alleghaniensis) in the Great Lake Entomologist.